Burning is Banning: On the Qur’an 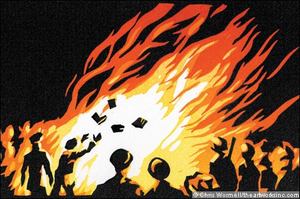 In celebration of Banned Books Month, PEN America once again reached out to PEN members, supporters, and staff—writers and editors of all backgrounds and genres—who sent us their reflections on the banned books that matter most to them. Today’s piece comes from Shane McCrae, author of  Blood. To find out more about how you can get involved with Banned Books Month, click here.

I was a rotten person before I read the Qur’an. That’s not to say I’m not in some ways—maybe in many ways—still rotten. But before I read the Qur’an—before my first personal spiritual awakening, which took me from Islam, to Taoism, to what must seem from the outside a Christianity incomprehensibly powered by left-wing political convictions and belief in the literalness of the stories about the life, death, and resurrection of Jesus—I was rottener. Sure, I cared about other people, and acted accordingly, but my concern for others, my love, was shallow—wide, but shallow. For one thing, I was an atheist (and let me make this clear right now—I don’t think being an atheist is at all a bad thing, but if I didn’t mention it here what follows would make less sense) and thought nothing of mocking people—even members of my family—who believed what I did not. Now I’ve come to realize that it is unloving, even inhumane, to mock people for believing (or for not believing, for that matter) in God. But if someone had told me at the time that I was being unkind, I doubt I would have believed her/him, or even entertained what she/he was saying—I considered believers beneath me. And the ugly truth is—and I see this attitude everywhere nowadays among those who mock people of faith—I considered believers, to a certain extent, sub-human. I was a bigot. I was a bigot and the Qur’an changed me.

At this very moment, somebody somewhere in the United States is trying, in some way or other—be it by burning, be it by banning—to censor the Qur’an. At this very moment, at least one of my Facebook friends is mocking a person or group of people for her or his or their faith. I thank God that the latter would almost certainly be horrified by the efforts of the former—even my younger, rottener self would have been horrified by the many Qur’an desecrations that have taken place since the September 11, 2001 attacks. But I wouldn’t have been horrified because such desecrations aren’t attacks on a book, or even on a religion, but on people—I would have been horrified because I was, and still am, happy for any excuse to be horrified by the things people on the far right sometimes do. My love was wide, but shallow.

Reading the Qur’an deepened my love. The Qur’an teaches many good things, but, for me, at least, its most important lesson is that each and every human being was created for fellowship with—and, it could be said,for the benefit of—each and every other human being. I have been haunted and strengthened by this sentence from sura 49, chapter 13, since I first read it 15 years ago: “We created you from a male and female, and made you into peoples and tribes so that you might come to know each other.” The differences God placed in and between us are there for a reason—we make ourselves into better people through our efforts to overcome them. God’s first act of creation reverberates through us every day. I think God that I have been changed by the Qur’an; I thank God for those who would be horrified by the desecration of the Qur’an; and, though I pray they will direct their energies elsewhere, I thank God for those who would desecrate the Qur’an—they, too, are moved by and further the reverberations of God’s creative act. They make those who would challenge them better people, and they themselves will be made better by being challenged. They do the work of the book they burn.

Shane McCrae is an American poet. His poetry collection The Animal Too Big to Kill won the 2014 Lexi Rudnitsky/Editor’s Choice Award, and his poems have appeared in Best American Poetry 2010, American Poetry Review, and African American Review. He is the recipient of a 2011 Whiting Award and a fellowship from the National Endowment for the Arts. He holds an MA and MFA from University of Iowa, and a JD from Harvard.

A jailed Belarusian blogger, Syarhey Tsikhanouski, who intended to take part in the August presidential election, has been given an additional 15-day jail term for what a court in Homel called the "organization of an unsanctioned mass gathering."
https://bit.ly/2LMphw6

A Vietnamese man arrested and beaten by police for delivering books from a publishing house targeted by authorities for putting out proscribed political books is recovering and his daughter has been released, @RadioFreeAsia reports.
https://bit.ly/3cJX1WC

Thanks to the efforts of @SenatorMenendez & @SenRubioPress, PEN America is proud to announce that this year’s #WorldPressFreedomDay Resolution has been introduced to Congress, honoring thousands of journalists who fight year-round to defend #pressfreedom: https://bit.ly/2LKKqXp.