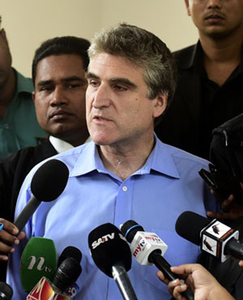 PEN American Center joins English PEN and PEN International in expressing concern for British journalist David Bergman, who has been found guilty of contempt in a court in Bangladesh. PEN calls for the sentence and conviction to be overturned immediately.

Bergman, an investigative journalist, maintains a popular blog on the Bangladesh War Crimes Tribunal. In February this year, a lawyer who had no previous involvement with the International Crimes Tribunal filed a court application claiming that three articles on the blog (one written two years earlier) were in contempt of the Tribunal, presumably for publishing estimations of the number killed that . In response, the Tribunal first demanded an ‘explanation’ of the posts and held an oral hearing. On April 17, the court issued contempt proceedings. Bergman was found guilty of contempt and ordered to pay a fine of 5,000 taka ($65 USD) at a hearing on December 2. Failure to pay the fine will lead to seven days in prison.

Bergman described the decision as “hugely disappointing—and indeed I would say shocking, particularly due to my long-standing journalistic work of many years.”

Bergman, who edits local English-language daily New Age and writes for the Daily Telegraph, has lived and worked in Bangladesh for over a decade.

“David Bergman has a well-earned reputation for being a fine investigative journalist,” said Salil Tripathi, former co-chair of English PEN’s Writers at Risk Committee and a former board member, who recently published The Colonel Who Would Not Repent on Bangladesh’s war of independence. “Like any good journalist, David investigates facts, analyzes and interprets data, and raises questions, going as far as facts can take him. David has been writing about the tribunal meticulously, respectfully, scrupulously and fairly. This verdict punishes the pursuit of truth and stifles any spirit of inquiry.”

“There can be no justification for punishing David Bergman, who has simply engaged in the professional work of journalism and of public debate. No one can be in contempt of court or have committed a crime because he has examined numbers. Such a ruling brings personal hardships to him and his family. But it also damages the reputation of Bangladesh as a progressive democracy….

Bangladesh has struggled since its war of independence with political instability. Part of this struggle has centred on establishing a national narrative which unites the population – a population with a variety of languages and religions, even if Bangla and Islam account for the vast majority. However, you cannot impose a national narrative by narrowly freezing historic interpretations, including statistics. And you certainly cannot impose a fixed narrative by punishing those who are part of a process of developing a public discussion within or about the country.”