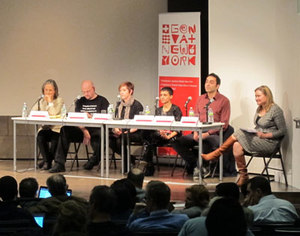 Today, we know that social media did not create the Arab Spring. Each of the countries involved—from Tunisia to Egypt to Libya—had an emerging civil society that complemented the online activism. (For more on this point, see our interview with Tunisian journalist Sihem Bensedrine.) The panelists echoed this view by explaining that the optimism of the Arab Spring has been supplanted by highly nuanced, sophisticated approaches to using the Internet to effect change. Platforms such as Facebook and Twitter offer opportunities to air political views; yet governments in both developed and developing countries have strengthened their ability to censor or block information passing through the web. Technology companies have also been complicit in kowtowing to national censorship laws—Twitter and Google recently announced that they would selectively censor information by country.

Stephane Koch, Vice-President of the ethical hacking company High-Tech Bridge SA, offered a cogent analysis of the hacking community. Hacker collectives such as Anonymous are difficult to understand, he explained, because anyone can self-identify as a member—both criminals and human rights activists. But ethical hackers can offer technical solutions to activists to crack censorship regimes.

Increasingly, activists and netizens rely upon programs like the Tor Project, which anonymizes one’s use of the net by randomly sending information over intermediary computers that have been donated by willing users. Syrian blogger Anas Qtiesh and Saudi journalist Ebtihal Mubarak also described several new tools being employed in Syria and Saudi Arabia, respectively. But they agreed that, as in countries such as China, sometimes the most secure conversation in a repressive regime is analog—offline and out of hearing.

Reporters Without Borders has vigorously begun to combat online censorship by naming and shaming countries that restrict the Net, having published a list of Internet Enemies (Burma, China, and Iran among them) and Countries Under Surveillance (including France and Venezuela). RSF has also begun to offer mirroring tools for organizations to duplicate their sites abroad in order to avoid DDOS attacks or blocking.

Earlier today, I spoke with an activist from Central Asia at the UN Human Rights Committee. He complained about the low bandwidth of the Internet in his country, but also the fact that web sites are routinely blocked. Yet he was eager to learn more about the new tools that address these challenges. His interest demonstrates how these technical solutions can have an immediate impact on human rights.

PEN, too, is taking these threats seriously and is hard at work on a new approach to digital freedom. We hope to share our insights soon as we continue to defend free expression on and off the web.