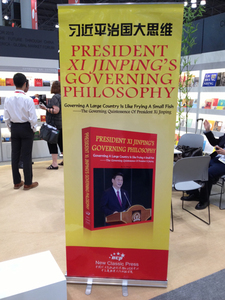 Despite its reputation as a meticulous book censor and jailor of critics, China was given 25,000 square feet of exhibition space as the guest of honor at BookExpo America, which opened Wednesday at the Jacob Javits Center in New York City. The Chinese delegation filled its space with clean white conference booths, artfully accented with bamboo, but inside was a muscular display of Communist Party pride. Books, of course, played no small part—especially those by Chinese President Xi Jinping, which were stacked everywhere. But close by were other projections of soft power, including a breezy, all-English panel discussion of the superiority of the Chinese political system (speakers said one-party rule ensured growth and assured Chinese stability) and a ceremony marking the donation of 25 copies of a book depicting Japanese wartime aggression in China to the Harvard Yenching Library (the donation to the august institution clearly aimed at legitimizing its propagandist content).

BEA’s selection of China as a special guest this year underscores how increasingly important Chinese publishing is to the global book market. As Jonathan Nowell, president of Nielsen Books, noted at the conference, China is “far and away the second largest book market in the world” after the United States. Together, the U.S. and China account for 40 percent of all global sales of books, Nowell said. As a publishing market, China has heft. It demands to be courted. Hundreds of Chinese writers and publishers came to sell books and ink deals. But the force behind the BEA delegation is the Communist Party. Chinese publishing, first and foremost, is still propaganda—which is why the main China events on BEA’s opening day involved aggressively non-commercial titles. They included the book about Japan’s defeat in World War II donated to the Yenching Library, a study of China’s claims to disputed islands in the East China Sea, and an exploration of something called ‘Red Boat Spirit,’ a work ethic espoused by President Xi Jinping. Sure of its market appeal and growing in national pride, China used the BEA platform not to sell its authors and publishing industry to the world but to assert Communist Party goals and strategies.

If there was discomfort among conference organizers or attendees, it wasn’t evident. Steven Rosato, BEA’s show director, called China “the most significant foreign delegation that we have ever hosted at America’s largest publishing convention.” The expo made a pleasantly bustling backdrop for Fudan University scholar Zhang Weiwei as he touted his new book “The China Horizon,” a critique of liberal democracy, arguing that western-style journalism—with its bent toward negative stories—could learn something from China’s restricted but upbeat media. Zhang, a former translator for Deng Xiaoping, is so eloquent and charming that it’s easy to miss his provocative and unapologetic defense of Chinese authoritarianism. Zhang was joined on stage by Robert Lawrence Kuhn, American author of “How China’s Leader’s Think.” A passerby could easily have mistaken their faux debate for free expression, a sign that China is willing to engage on questions of political models and reform. But Kuhn has shown his fervent support for Xi’s leadership. At the Frankfurt Book Fair in October of last year, he spoke at the launch of the Chinese President’s book on governance, calling it a “milestone.”

Displays like this are highly misleading. In fact, the available space for civil society and free expression has shrunk dramatically under Xi. Voices once considered moderate, including the Uighur professor Ilham Tohti, the legal scholar Xu Zhiyong, the lawyer Pu Zhiqiang, the activist Guo Yushan, and the journalist Gao Yu, are among the growing ranks of critics who have disappeared into detention or been convicted. The current reform agenda, cleaning the party of corruption while fortifying its ideological foundation, doesn’t tolerate dissent.

To avoid potentially embarrassing clashes over issues of free speech and free expression, most of the BEA panels (at least on the first day) were general, about China’s market potential, or were narrowly focused on less politically sensitive segments of the business, such as children’s publishing and scientific publishing. These are areas that are relatively free of censorship and propaganda in China. So it was a packed room that listened to Li Xueqian, president of the China Children’s Press, explain that from 2001 to today, China’s children’s book market had seen a 10 percent annual growth rate (with the exception of the 2012-2013 period, when it slackened). As Chinese families spend more on their children and more Chinese move to cities, the growth in children’s books is expected to accelerate. “I have a feeling this trend in the children’s book market will continue for the coming 10 years,” Li said.

But if conference-goers think that children’s books and young adult titles never get censored in China, they are mistaken. No genre is entirely safe from Chinese censorship. British children’s book author and illustrator Anthony Browne had his books pulped in China because the cover of one edition included a Tibetan flag, according to this report by the New Humanist. The Chinese version of Khaled Hosseini’s “The Kite Runner,” hugely popular in China—especially among students—is not faithful to the original. In a passage about 1989, the narrator says: “That was the year that the cold war ended, the year the Berlin Wall came down. It was the year of Tiananmen Square.” The final sentence was erased by the Chinese publisher, who called the deletion and other edits “necessary adjustments.”

China’s massive display at BEA is surely enticing to American writers and publishers looking to expand their audiences (and revenues) overseas. But at what price? Conspicuously missing from the expo is any mention of China’s massive censorship machine that, as documented in a new PEN report, scraps any mention of issues like Tibet, Tiananmen, and anything else that goes against Communist Party doctrine, often without the author’s consent. PEN staff and volunteers were on hand at the Javits Center yesterday to share the report and remind attendees considering the Chinese market that governments make very bad editors.