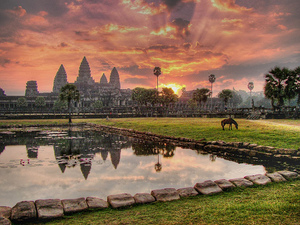 Long before I became a writer, I knew one day I would tell the story of my family during the Khmer Rouge regime. Even in the midst of that ordeal, as I lost one family member after another, I felt I would have to explain why I, hindered by polio, was still alive when those stronger and healthier, more fit to survive the brutality, had perished. Young as I was—five years old when the Khmer Rouge took over Cambodia in 1975—I grappled with the arbitrariness of my survival, even as I couldn’t express it. I didn’t know why I lived. I was afraid if I voiced the question, no one would have an answer for me—that the senselessness was just that, senseless and inexplicable.

After the regime collapsed in 1979, my mother and I escaped to a refugee camp in Thailand. One day I faced an immigration officer who sought to question me, separately from my mother, to establish a coherent narrative of our experience of war and our eligibility for immigration. After the horrors we’d lived through, I’d lost the ability to communicate even in my own language. If I could not tell my story, the translator explained, my mother and I might never leave that camp, or worse, we could be sent back across the border.

When I finally spoke, the story I ended up conveying was not so much about the “killing fields”—the violence and cruelty we’d emerged from—but how big my family had once been. I wanted my listeners to know that even though my family was not with me, I felt certain that without their love I wouldn’t be alive, wouldn’t have had the strength to hang on, the courage to make the escape with my mother. I sensed that, while the nightmare we’d lived through was incomprehensible, it was possible for my questioners to understand a child’s love for her family, her sorrow at losing them, her reluctance to say for certain if a loved one was dead or alive when she only felt his death, felt his ghost beside her.

That interview not only broke my self-imposed silence but opened the possibility that if I spoke of my family in a way that honored their memories, it was all right to speak, to reveal our story. I was not called back for another questioning. Soon after, my mother and I were granted immigration visas to the United States. I’d found that words, the stories we share, could save us.

Decades later, sitting down to write my first novel, I remembered myself as that child trying to articulate a coherent narrative out of the brutality of those four years. While the Khmer Rouge revolution took place in a country that may seem foreign and far away to most, and at a time that belongs more to the distant past than the present, I wanted to tell a tale that would transcend geographical boundaries and make history immediate. The only way to proceed, I realized, was to step out of the limited sphere of my solipsistic pain and loss, my guilt at having survived, the fear that I didn’t have the skills to weave this complex story. In short, I took the focus away from myself.

“Sometimes we enter art to hide within it,” writes Michael Ondaatje in Divisadero. “It is where we can go to save ourselves…” It’s true that as a writer I’ve sometimes sought the enclosure of my art for its comfort and protection. I’ve slipped into it both to hide and to be rescued. But facing the grim reality of this story—that it is rooted in my family’s suffering—I knew I didn’t have, couldn’t ask for, the protection of art. To tell the story properly, honestly, it wasn’t enough for me to invoke the ordeal with words alone: I had to relive it. I had to be that child again who stood exposed to the destruction and atrocity, helpless in my inability to prevent the deaths of loved ones. While an estimated 1.7 million Cambodians perished from starvation, disease, forced labor, and systematic executions, I survived. This fact alone I could not escape, whichever way I chose to tell the story, as autobiography or fiction. So, as a survivor, I entered art to try and save those I could not protect as a child.

Yet, even as I chose a fictional landscape with the twists and turns of our journey rearranged, the towns and villages altered and renamed, and family members resurrected and imbued with qualities at once familiar and new, I couldn’t veer from the truth of that experience. If anything, I searched for it, hungered for some kind of understanding, some insight into the incomprehensible. I may never find it, I told myself, the answer to the senselessness. But whenever I thought of my father, his determination to meet his demise with dignity, I’d console myself with the thought that he’d died for some inexpressible truth, some intangible beauty.

Beauty and truth are companions, as Dickinson reminds us. As a writer, confronting the truth that my life will always be linked to my father’s death, I allow myself to believe that some part of me lives and strives now for the beauty he wanted me to see, and, that however I failed as a child to protect those I loved, perhaps through art—through my endeavor to reach for it—I can make them live again.