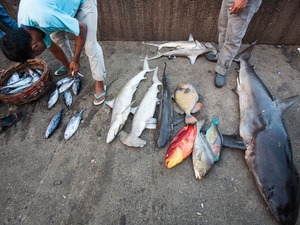 I was drinking café de olla from a rusty blue pewter cup. Doña Tomasa had placed a kettle of the same blue pewter on the shack’s sandy ground. There were no tables or chairs. The palm fronds on the roof were already black and frayed. The mild breeze stunk of rancid fish. But the café de olla was strong and sweet and helped to wake me up a bit, to animate my legs, which had gone numb after two hours of driving to the port of Iztapa, on the Pacific coast. My back was wet, my forehead sticky and sweaty. The heat seemed to increase the fetidness in the air. A scrawny dog was sniffing around on the ground, in search of leftovers or crumbs that might have fallen on the sand. Two barefoot and shirtless kids were trying to catch a gecko that was chirping above, hidden among the palm fronds. It wasn’t yet eight o’clock in the morning.

Here you go, said Doña Tomasa as she handed me a tortilla with pork cracklings and chiltepe, wrapped in newspaper. She leaned on one of the shack’s columns, wiping her plump hands on her apron, pushing her feet in and out of the warm volcanic sand. She had salt-and-pepper hair, weathered skin, and a slightly cross-eyed gaze. She asked me where I was from. I finished chewing what I had in my mouth and, with my tongue still slightly stunned by the chiltepe, told her I was Guatemalan, just like her. She smiled pleasantly, perhaps suspiciously, perhaps thinking the same thing I was thinking, and turned her eyes back to the cloudless sky. I don’t know why it’s always hard to convince people, to convince myself even, that I’m Guatemalan. I suppose they expect someone darker and squatter, more like them, and who speaks a more tropical Spanish. It’s not like I ever miss an opportunity to distance myself from Guatemala, both literally and literarily. I was raised abroad. I spend long periods of time away. I write and describe things from the outside. As if I were a perpetual migrant. I blow smoke on my Guatemalan origins until they become opaque and unclear. I don’t feel nostalgia, or loyalty, or patriotism — in spite of the fact that, as my Polish grandfather liked to say, the first song I learned to sing when I was two years old was the Guatemalan national anthem.

I finished the tortilla and the café de olla. After collecting the check, Doña Tomasa gave me directions to a lot where I might park my car. There’s a sign, she said. Ask for Don Tulio, she added, and walked off without saying goodbye, dragging her bare feet as if they were weights and muttering something bitter, perhaps a little tune.

I lit a cigarette and decided to stroll for a bit on the Iztapa highway before returning to my car. I passed a cashew and mango vendor, a deserted gas station, a group of bronzed men who stopped talking when I walked by them and looked at me sideways, out of resentment or maybe modesty. The ground was a layer of papers and wrappers and dried leaves and plastic bags and discarded green almonds, crushed and rotten. A pig squealed ceaselessly in the distance. I continued walking, slowly, unconcerned, and watched a mulatta on the other side of the highway, too fat for the black and white striped bikini she had on and too big-assed for her heels. Suddenly my foot felt wet. Because I’d been distracted by the mulatta, I’d stepped in a red puddle. I stopped. I turned to the left and looked inside a dark and narrow warehouse and realized the ground was littered with sharks. Small sharks. Medium sharks. Blue sharks. Grey sharks. Brown sharks. Even a couple of hammerheads. They were all floating in a briny mud of viscera and blood and even more sharks. The smell was practically unbearable. A girl was kneeling among them. Her face shimmered from the water or perhaps sweat. Her hands were buried inside a long slash on the shark’s white belly, as she pulled out organs and entrails. In the back of the place, another girl was spraying down the ground with the weak stream from a hose. It was the fishermen’s cooperative, according to a badly painted sign on a wall. Every morning, I imagined, all of the fishermen in Iztapa would take their catch there, and those two girls would clean, butcher and sell it.  I noticed that most of the sharks did not have fins. I remembered reading somewhere about the international black market for fins. They called it finning. I’d have to be careful later, I thought, in the sea. It looked like it was a day for sharks.

I tossed the cigarette butt and quickly returned to my car, almost as if I were fleeing from something. When I drove away I realized that I’d already begun to forget the image of the sharks. I understood that an image, any image, inevitably begins to lose its clarity and strength, even its coherence. I felt an impulse to stop the car in the middle of town and look for a notebook and pencil to write it down, to make a record of it, to share it through words. But words aren’t sharks. Or perhaps they are. Cicero said that if a man could climb to heaven and contemplate everything that there is in the universe, the admiration he’d feel for all that beauty would dwindle if he didn’t have someone with whom to share it, someone to tell it to.

After a couple of kilometers on a dirt road, I finally found the sign that Doña Tomasa had told me about. The lot was owned by an indigenous family. Their house was made from pieces of sheet metal, bricks, broken tiles, cinder blocks with rusted steel bars exposed. There was a plot of corn and beans, a few sad and lifeless palm trees. Chickens ran free. A white goat chewed on the bark of a guava tree while tied to that very same guava tree with a wire. Under a canopy, three young women sat on the floor and cleaned corn husks while they listened to an evangelist preaching on a portable radio.

An old man, tanned and taciturn and still sinewy in spite of his years, approached me. Don Tulio? At your service, he said without looking at me. I told him I had been sent by Doña Tomasa, the woman from the shack. Right, he said, scratching his neck. A five- or six-year-old boy came over and took refuge behind one of the old man’s legs. Is he your son? I asked, and Don Tulio whispered that yes, he was the youngest. When I stretched out my hand, the boy lowered his eyes and blushed at having to perform such an adult gesture. I opened the trunk and started to pull out my things when, as if emerging from an abyss, as if choked by something — perhaps the dryness or the humidity or the now inclement sun — I heard a guttural cry. I stood still. I heard more cries. In the distance, behind the house, I managed to see an older woman who I assumed was Don Tulio’s mother, or perhaps his wife, helping a fat and seminude young man who wobbled drunkenly and stumbled to the ground, then kept on with his inebriated screams and headed straight for us. He was struggling to come in our direction. Whatever he wanted had to do with us. The woman, fighting with all her might, was determined to stop him. I averted my gaze, out of respect, or shame, or cowardice. No one else seemed very worried.

Don Tulio told me it would be 20 quetzals to park all day. I plucked a bill from my wallet and paid him while listening to the young man’s moans. Don Tulio asked if I knew how to get to the beach or if I needed his son to accompany me. I was going to say thanks, that I didn’t know how to get there, when suddenly the young man screamed something incomprehensible to me, but which sounded crude and painful, and Don Tulio immediately rushed off. Now strewn on the ground, the young man convulsed like an epileptic. The old man and woman were finally able to drag him away and pull him up behind the house, out of sight.

His howling, although softer and more distant, could still be heard. I asked the little boy what was going on, who the young man was, if he was sick or drunk or something worse. Kneeling, playing with an earthworm, he ignored me. Leaving my things on the ground, I slowly, cautiously, started toward the back of the house.

The young man was in a bamboo cage, thrown on a muddy floor, wet with water or perhaps urine. I could hear the buzzing of the flies around him. This one turned out badly, whispered Don Tulio when he saw me beside him, but I couldn’t figure out if he meant morally or physically, if he was referring to a perverse behavior or an alcoholic tendency, a nervous condition or mental retardation. I didn’t want to ask. I silently watched the young man through the thick bamboo bars. His pants were wet and semi-open. His chin was white with spit, his chest saturated with tiny fistulas and sores, his bare feet covered in mud and muck, and his eyes were red, weepy, almost closed. I considered that, for a poor indigenous family, the only option was to separate him from the world, to keep him away from the world by building a bamboo cage. I thought that while I could take a free day and drive two hours from the capitol to a beach on the Pacific simply to go for a swim, this young man was a prisoner of something, of some kind of evil, perhaps alcohol, perhaps dementia, perhaps poverty, perhaps something even bigger and more profound. I wiped the sweat from my forehead and eyes. Maybe because of the bright light that was coming in from the side, the cage suddenly seemed sublime to me. Its craftsmanship. Its shape and fortitude. I went near and grabbed two of the bamboo bars. I wanted to feel the bamboo in my hands, the warmth of the bamboo in my hands, the reality of the bamboo in my hands, and in that way not feel my own indifference, nor the indifference of an entire country. The young man writhed in the puddle, stirring up the swarm of flies. Now his moans were docile, resigned, like an animal that’s been mortally wounded. I let go of the two bamboo bars, turned around, and went to the sea.

Translated by Achy Obejas. This story is forthcoming in Immigrant Voices: A 21st Century Reader, to be published later this year by The Great Books Foundation.