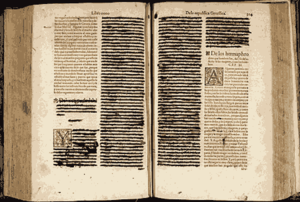 For our second-annual Banned Books Month, PEN America once again reached out to PEN members, supporters, and staff—writers and editors of all backgrounds and genres—who sent us their reflections on the banned books that matter most to them. Today’s piece comes from PEN staffer Jordan DeBor. To find out more about how you can get involved with Banned Books Month, click here.

Someone has already taken out a Minolta cellular phone and called for a car, and then, when I’m not really listening, watching instead someone who looks remarkably like Marcus Halberstam paying a check, someone asks, simply, not in relation to anything, “Why?” and though I’m very proud that I have cold blood and that I can keep my nerve and do what I’m supposed to do, I catch something, then realize it: Why? and automatically answering, out of the blue, for no reason, just opening my mouth, words coming out, summarizing for the idiots: “Well, though I know I should have done that instead of not doing it, I’m twenty-seven for Christ sakes and this is, uh, how life presents itself in a bar or in a club in New York, maybe anywhere, at the end of the century and how people, you know, me, behave, and this is what being Patrick means to me, I guess, so well, yup, uh…” and this is followed by a sigh, then a slight shrug and another sigh, and above one of the doors covered by red velvet drapes in Harry’s is a sign and on the sign in letters that match the drapes’ color are the words THIS IS NOT AN EXIT.

My eighteenth birthday was significant for two reasons: I legally became an adult and could lawfully drink alcohol, and I could finally, legally, buy a copy of Bret Easton Ellis’s American Psycho.

Why? Because American Psycho is a banned book in Australia.

I remember buying the book the following winter, right before I was set to leave Australia to study literature at Hampshire College. It was an odd experience, being carded for buying literature. The book stared at me through a plastic wrapping with a little sticker that read: “R. Category One. Not available to persons under 18 years. Restricted,” the same warning label that had been issued upon the novel’s release in 1991. It was the first time an R rating had been issued for a mainstream literary work, and it is still completely banned from sale in the state of Queensland. The official reason for the book’s censorship was due to its “graphic violence, sexual content, and its potential to influence minors.” But there are also, I believe, deeper issues that tap into the history of Australia and the nature of the national psyche.

American Psycho was, and continues to be, vilified as meaningless, hateful, and lacking any literary merit. John Dickie, who was, at the time of the novel’s release, the chief censor at the Australian Office of Film and Literature Classification, said that “as a satire on yuppies it has a lot going for it,” but nevertheless he found the book “distasteful.” In fact, Ellis himself was shocked at the decision to ban his book down under, saying, “Australia always seemed to me so buff and able to deal with shit like that, I always saw it as being really masculine. And yet here’s this little book in its own little wrapping.” In fact, it might be this image of Australia as being “buff” and “masculine” that influenced the decision to restrict American Psycho’s sale.

As its criminal past has shown, Australia is no stranger to violence and has seen its fair share of deadly gun massacres, which may have come into consideration when judging the content of Ellis’s work. While Patrick Bateman uses various instruments in the implementation of violence, there are several scenes of reckless shooting sprees, and he is assumed to be carrying a gun at all times. The 1991 Strathfield massacre in Sydney, Australia saw Wade Frankum stab and shoot fourteen people, eight of whom died. Police later found a collection of violent films and literature in his apartment, among which was a well-worn copy of American Psycho. Five years later, the Port Arthur massacre bore witness to Martin Bryant (later termed the “Australian Psycho”), who killed thirty-five people and wounded twenty-one others, resulting in a government–issued gun buyback that successfully collected 600,000 firearms. Port Arthur was the last massacre the country has seen since.

I re-read American Psycho several times throughout college, coming back to it with a strange curiosity over what exactly it was trying to say and how it was being said. Those endless descriptions of records, brands, and advertisements had a captivating allure as the postmodern prose washed over me. I appreciated the link that Ellis makes between violence and consumerism, situating consumerism as a kind of violence,  wherein the ethos of late ‘80’s capitalism is pushed to the metaphorical edge of barbarism and brutality. In this reading, the violence provides a commentary on a kind of failing consumerist psyche.

I recently re-read American Psycho again, prompted by the question of whether or not the novel could stand on its own if the violent sections were excised. Ellis himself has said that “[t]he violence upset me as a reader 10, 12 years after being published. But I don’t think it distracted from the novel.” I don’t think so either. However, while I am not defending the novel’s violence as such, I am defending the right to freedom of expression on the basis that censorship, restriction, and banning are far more insidious to a culture than the fiction itself. Unlike Ellis, who called the shrink-wrap around his novel “adorable…cute,” other authors might find this kind of censorship anathema to their creative freedom, an implicit warning to all artists: “Don’t go too far. You’ll pay the price.”