As Nigeria Fights Ebola, Activists Carve Out a Future for an Open Internet 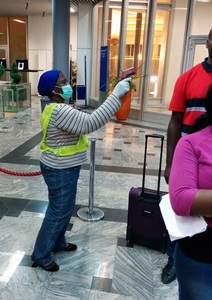 In March, we reported on the devastating war being waged against literature in Nigeria on two fronts: first by the militant Islamic group Boko Haram, which has violently attacked all forms of Western education; second by the government with their poor decision to throttle the import of foreign books. Since our writing, Boko Haram made international news headlines by kidnapping over 200 young girls in the northeast state of Borno, and the dreaded Ebola virus made its way from Liberia to the metropolis of Lagos. You might think that nothing good ever happens in Nigeria. And you would be wrong.

Last week, I joined PEN Nigeria president Tade Ipadeola at the country’s first Internet Freedom Conference in the federal capital of Abuja. The conference was organized by the digital freedom group Paradigm Initiative, which has been busy advocating for a free and open internet in the country. Nigeria is currently tackling several critical issues as more users come online. The country has 62.4 million internet users, or about 33 percent of the population, and penetration is growing rapidly as more users utilize their mobile phones to access the web. Broadband internet, however, remains prohibitively expensive at about $110 per month. The government has responded by supporting the growth of local mobile phone production facilities and by aggressively expanding broadband deployment, with an ambitious goal of reaching 30 percent broadband penetration in 2018 [PDF].

One of the benefits of arriving late to the internet economy is that Nigeria can learn from the mistakes and successes of other countries. For example, activists are striving to implement net neutrality into law, and to legislate against corporate data mining and government surveillance. The Canadian NGO Citizen Lab identified Blue Coat devices capable of monitoring and filtering the net in 2013. However, it is not clear how these devices are being used or who exactly is operating them. Nigeria therefore is at a crossroads in which it can adopt progressive legislation and commit to free expression—something supported by its 1999 constitution—or it can create an internet infrastructure with “built-in” censorship like China.

The conflict with Boko Haram and the rise of Ebola place digital freedom issues in sharp relief. On the one hand, the government wishes to track and identify the militant Islamist group, and the internet will surely help identify the members’ movements and communications. But journalists have been harassed by government military forces for their coverage of the government response to Boko Haram in the northeast, and one Twitter user was detained for 10 days for reporting on a shootout before concerned activists protested for his release. Meanwhile, a free and open internet is essential for public health information about the Ebola virus. While I was in the country, I found reliable information on the virus in newspapers, television, radio, and the internet.

But another danger looms on the horizon in Africa’s largest economy and democracy. That danger is, oddly enough, the February 2015 elections. In Abuja, President Goodluck Jonathan’s image was plastered on billboards and at stoplights throughout the city as he seeks a second term, and on television a commercial effusively compared him to Mohatma Gandhi, Nelson Mandela, and (yes) Barack Obama. It’s clear the ruling PDP party and the opposition APC party will campaign aggressively as they jostle for votes. There is a very real possibility that both parties will sew ethnic discord and misinformation to win office—and this will make free expression issues take center stage. Information must flow freely but the government may feel compelled to reign in hate speech. The response will set the stage for the next few years.

PEN Nigeria, too, will play an important role in the coming months through exciting new projects on linguistic diversity and free expression advocacy. We’ll be featuring interviews with writers and advocates in the coming weeks. Stay tuned.