Animal Farm: Banned by the Soviets, Promoted by the CIA 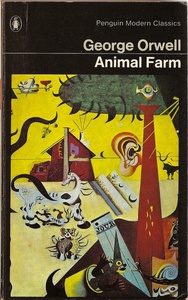 There are many places in the world where George Orwell’s satire Animal Farm has at one point or another been banned, making reading it an act of political bravery. To say that the United States is not one of these places is an understatement. Published in 1945 as the Second World War ended and the Cold War began, Animal Farm was made a selection of the Book of the Month Club and thus inducted into the mainstream of the mainstream of American culture. In the 1950s, the CIA funded an animated film version to be distributed throughout the world; if we are looking for a definition of the opposite of a banned book, a book that has received financial support from the CIA seems like a good candidate. Since then, it has become a book that many of us are forced to read in high school. “We will not be reading Animal Farm because the ideas in it are dangerous” is a statement unlikely to have been uttered by any American teacher, unless that teacher was hoping to get fired for Communist sympathies.

It is easy to understand why Animal Farm received so much official and quasi-official American approval: the story of animals who drive out their master Farmer Jones and run their farm by themselves, eventually succumbing to tyranny, it is a direct allegorical attack on the Soviet Union. And it should be admitted that the book made a powerful case against the evils of Stalinism at a time when not all Anglophone readers wanted to admit those evils. For last year’s Banned Books week, the New Republic’s website reprinted (with appropriate sheepishness) the magazine’s original 1946 review of Animal Farm, in which the reviewer, George Soule, chided Orwell for being unfair to the Soviet Union:

There is a pathetic incident when Boxer, the sturdy and loyal old work horse, is sent off to be slaughtered and turned into dog food and bone meal, under the pretext that he is being hospitalized. Just what part of Soviet history corresponds to this?

What part of Soviet history corresponds to this? Oh, pretty much all of it. Soule is correct, however, in pointing out that the allegorical matchup of Animal Farm to Soviet history is not quite one-to-one. (Napoleon, notably, is both Lenin and Stalin.) It is precisely this that makes Animal Farm worth reading in 2014, the twenty-fifth anniversary of the fall of the Berlin Wall and long past any danger from the Soviet Union. Though the book cannot and should not be divorced from the Russian Revolution, Orwell sees beyond the specifics of that revolution, and even beyond revolution itself, to tell what is paradoxically a human story. The characters, memorably if quickly sketched, feel much more like real people than do many characters in politically engaged writing who ostensibly are real people. Particularly funny is a scene in which, the morning after Napoleon discovers a store of alcohol in Farmer Jones’s basement, he announces that he is dying. This will be familiar to anyone who has experienced a hangover for the first time. What distinguishes Napoleon from the rest of us is that Napoleon announces that the consumption of alcohol will be punishable by death. (He quickly reverses this announcement when, by the end of the day, he has made a miraculous recovery and feels like drinking again.) The strength of this portrait of Napoleon is that he is not simply a monster— or, as we like to say, an “animal”—but a person whose instincts towards domination go unchecked. It is a familiar idea that the difficulty facing communism is that it must be implemented by fallible, often greedy human beings—George Soule, not unfairly, pointed out that this was already a familiar idea when the book was published, and one that American readers would likely smugly assent to—but it has rarely been dramatized with Animal Farm’s literary power.

The important point for contemporary Americans is that communism is not the only ideology that must be implemented by fallible, often greedy human beings. If we wish to deny that “I will work harder,” Boxer’s honorable yet cowardly response to every new outrage perpetrated by Napoleon, has become our own honorable yet cowardly mantra, we will have to, well, work harder. We believe that if we train ourselves to, say, do a little better on the marshmallow test, we can avoid being turned into dog food, so we try not to notice that even or especially the hardest workers among us are being turned into bone meal. (I mock this idea, and yet whenever I worry about my own financial future, what do I think? “I will work harder.”)

Perhaps the most moving scene is one in which the horse Clover, after a horrifying purge by Napoleon, wistfully surveys the farm. “If she could have spoken her thoughts,” Orwell writes, “it would have been to say that this is not what they had aimed at when they had set themselves several years ago to work for the overthrow of the human race.” This basic emotion will resonate with those of us, including myself, who greeted the election of Barack Obama as the end of a very bad period in American history, and have since watched as the Obama administrated has begun a new war in Iraq, used secret law to assassinate American citizens, prosecuted whistleblowers, and defended NSA surveillance. (Last year, a PEN study found that “1 in 6 writers has avoided writing or speaking on a topic they thought would subject them to surveillance”; surely this is not what we aimed at when we set ourselves several years ago to work for the overthrow of George W. Bush.)

After she surveys the farm, Clover sings “Beasts of England,” the great song of the revolution, but now with a new sense of melancholy. Moments later, the song is banned. This kind of outright banning is unlikely to happen in the United States, at least to Animal Farm. But when we have decided that a book does not apply to us, we have already banned it. Even a book approved of by the CIA deserves a better fate than that.