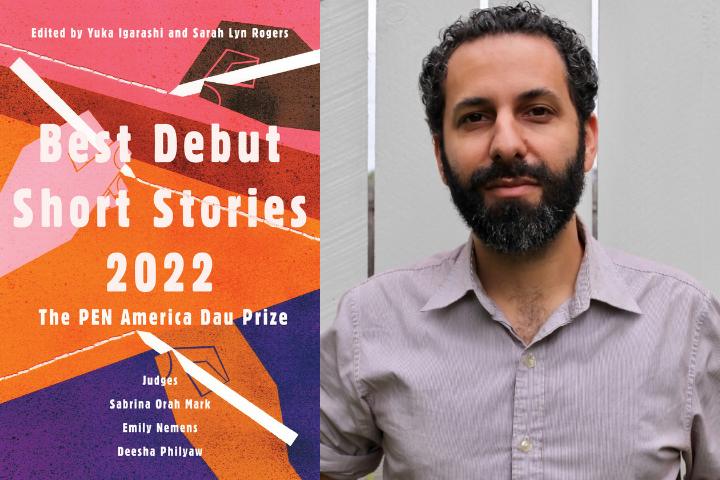 Edward Salem was chosen by Ottessa Moshfegh as the winner of BOMB Magazine’s 2021 Fiction Contest, and by Louise Glück as a finalist for the 2021 Bergman Prize. He is the founder and co-director of City of Asylum/Detroit, a nonprofit that provides long-term sanctuary to persecuted writers and artists who are forced to go into exile.

“Sacrilege” was originally published in BOMB.

A momentary feeling of mortal terror slithered down my spine and found me running toward the nearest object to hide behind, a solitary dumpster surrounded by blackened grass and ash and filled with burnt garbage, as it was local custom to set trash alight. I crouched and held still as the dogs approached, panting a chorus in the night, and when the horde began passing by where I had made myself small amid the sweet charred smell, they were beautiful. They were boy dogs and girl dogs, young and old, traveling in numbers for safety, a clan that moved as one through the outskirts of town, taking their chance to stretch their legs and see some of the side streets when the cars were asleep and no one was out, no one getting offended at the sight of them, or shouting in high human voices, or throwing stones and empty soda cans to scare them away.

You don’t always translate the French you use in your story. How has moving between languages influenced your writing?

I don’t really move between languages. I haven’t lived in Palestine in over a decade and my family stopped speaking Arabic at home many years ago. But I’ve always had a deep affection for the brokenness of my father’s English and that of the rest of my family who was born in Palestine, and an aversion to overly formal or composed writing, so I’ve tried to embrace a kind of looseness and playful breaking in my sentences and even in the way I think about structure.

And at the same time, having lived in places where I sometimes took in the language and other times avoided it, but either way, was surrounded by sounds I didn’t fully comprehend, I’ve come to feel as a writer that over-translating can be like over-explaining and take you out of the moment. When you travel, part of it is about not understanding, just feeling that bewilderment and experiencing the words as sound. Translating can make a story overly accessible in a way that’s patronizing. I’d rather have the reader experience the unfamiliarity of being in a foreign place.

It would be great if you cis white straight men would stop publishing for a decade or two! For everyone else, I find being alone outside is rarely a bad idea when writing.

The story massages Mikhail Bakunin’s idea that the urge to destroy is also a creative urge by following it through multiple inversions, from striking a pyramid to ideating the vandalism of the Louvre, to a final image that reverberates back across the rest of the story in a way that is, I hope, unexpected and a little funny.

I wrote it in one go on my back deck sweating in the sun. I had just woken up and the heat was making me grumpy but it was also really pleasurable. My notebook was open and this memory came to me of another time when I felt this lovely combination of grumpy pleasure in extreme heat. I started writing from that place and from memories of when I’d thought I would pursue performance art instead of writing. I was, and still am, mad at myself for not returning to Palestine in too many years, angst I transmuted into an impulse to kill an idol, the revered Palestinian poet Mahmoud Darwish.

I’m now part of a very sweet group of Dau Prize alumni cheering each other on. Being honored by the Robert J. Dau Prize and PEN is incredibly meaningful. PEN’s work with writers at risk shares a common mission with my work co-founding City of Asylum/Detroit, and while my story makes clear that I’m not a fan of many venerated institutions in the West, I can honestly say that PEN is one of the few that genuinely makes the world safer and better.