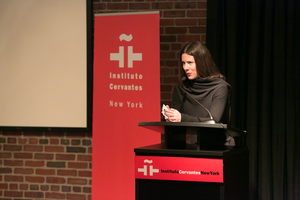 This tribute was written by Alta L. Price. She is the translator of Jürgen Holstein’s The Book Cover in the Weimar Republic and Corrado Augias’s The Secrets of Italy et al. She is also Vice President of the New York Circle of Translators.

One winter evening a few years ago, I found myself seated at a table in the 92nd Street Y with a small group of strangers. At the head of the table sat the esteemed Edith Grossman, welcoming us to a 12-week course called “Reading Translations.” The round of introductions eventually came to me, and I said that after about a decade of doing nonfiction translation, I was hoping to learn a little more about how one might break into the field of literary translation. I had read Why Translation Matters and knew Ms. Grossman had extensive knowledge of the challenges this line of work poses to its practitioners. In response to my intro, she said, “Well, if you want to do literary translation, you just sit down and do it,” or something along those lines—I’m sure it was more eloquent in reality, because my mind was blown by the notion, distorting my memory of those few moments. Could it really be that simple? Yes and no. As usual, she’d made something exceedingly difficult sound excitingly straightforward. But I was enchanted, and dared to believe her, and acted accordingly. Thank you, Edie, for that dose of folly that got me going.