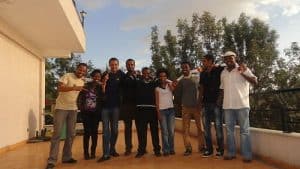 The Ethiopian Supreme Court on April 6, 2017, levied criminal charges against two Zone 9 bloggers, Atnaf Berhane and Natnail Feleke, three years after they were first arrested in April 2014. They were later acquitted of terrorism charges and released in October 2015. A third blogger, Befekadu Hailu, is also awaiting trial on criminal charges after being acquitted of terrorism in March 2017. Atnaf, Natnail, and Befekadu belonged to a collective known as the Zone 9 bloggers, and were arrested along with seven other members of the group, all of whom have been acquitted.

On the evening of March 25th, 2018, the Ethiopian Security Forces have re-arrested Befekadu Hailu and Mahlet Fantahunis and other journalists and politicians at a social event outside the capital, Addis Ababa. Hailu and Fabtahunis was accused of displaying a prohibited national flag and gathering in violation of an official state of emergency.  Befekadu Hailu and Mahlet Fantahunis was later released on the evening of April 5th after spending 12 days of unwarranted, inhumane imprisonment.

The Zone 9 bloggers are a collective of Ethiopian writers formed in May 2012 in a landscape of diminishing space for free expression in Ethiopia. Their blog was known to feature social and political commentary often critical of the government.

The bloggers were initially arrested in April 2014. They were charged under Ethiopia’s sweeping anti-terrorism law for their connections with international non-governmental organizations (NGOs) and writings that were critical of the government. Five of the bloggers, Tesfalem Waldyes, Asmamaw Hailegiorgis, Zelalem Kiberet, Mahlet Fantahun, and Edom Kassaye were released in July 2015, while another four, Abel Wabella, Atnaf Berhane, Natnail Feleke, and Soleyana S. Gebremichael, were acquitted and released on October 16, 2015. Another blogger, Befekadu Hailu, was acquitted of terrorism in March 2017, but now also faces criminal charges.

The Supreme Court decision comes after prosecutors filed an appeal against the 2015 acquittals of Soliana Shimelis, Abel Wabella, Atnafu Berhane, Befekadu Hailu, and Natnail Feleke. Although the court upheld all acquittals on terrorism charges, it replaced these with criminal charges for Atnaf, Natnail, and Befekadu. The criminal charges pertain to article 257 of the criminal code, which prohibits inciting violence by word of mouth or through writing. The charges carry a sentence of up to ten years in prison.

The Zone 9 bloggers were held in prison in harsh conditions for 18 months, subject to a drawn-out legal process replete with dozens of hearings in their case. At the end of 2016, at least 16 journalists were in jail in Ethiopia for peacefully expressing themselves, according to figures compiled by the Committee to Protect Journalists. Many were released in 2015, but Ethiopia remains one of the world’s leading jailers of journalists.

On February 14, 2018, Ethiopian prosecutors drop incitement charges against two Zone 9 bloggers, Befekadu Hailu and Natnail Feleke. The charges were dropped the same week that authorities released other jailed journalists, including Eskinder Nega. Prosecutors announce that they plan to drop the incitement charge on another Zone 9 blogger, Atnafu Berhane, but due to a paperwork error the process was delayed. A judge stated that the case against Berhane would continue if prosecutors fail to present the updated paperwork to the court on February 24. Another Zone 9 blogger and journalist, Elias Gebru, is still facing a charge of incitement. Gebru is to be due in court on April 3, 2018.

On March 25th, 2018, the Ethiopian Security Forces have re-arrested Befekadu Hailu and Mahlet Fantahunis at a social event outside the capital, Addis Ababa along with Eskinder Nega and other journalists. They stands accused of gathering in violation of Ethiopia’s current state of emergency regulations and displaying a prohibited Ethiopian flag that is popularly used among people who are opposed the ruling of the EPRDF coalition. Both bloggers has not yet been charged and is currently being held in a prison cell outside of Addis Ababa in crowded, inhumane conditions.

On April 5th, 2018, The Ethiopian Security Forces released Befekadu Hailu and Mahlet Fantahunis from custody after spending 12 days of unwarranted imprisonment. Befekadu Hailu and Mahlet Fantahunis was among a number of journalists, politicians and bloggers who had recently been freed from prison. After their arrest in late March 2018 for allegedly displaying an outdated flag and fathering in violation of the a state of emergency, both bloggers has been released with no charge being filed.

In this opinion piece for @dallasnews, David Newman says conversations about literature can help students learn how to argue politics fairly. Banning books deprives students of that opportunity. https://bit.ly/3rCXmoo

We are concerned by Russian prosecutors' move to extend the requested prison sentence for the historian Yuri Dmitriev. PEN America considers the charges against him to be politically motivated retaliation for his work uncovering mass Stalin-era graves:
https://tinyurl.com/yckwsnas.

Finally. The discussion of school libraries in TX we *ought* to be having: