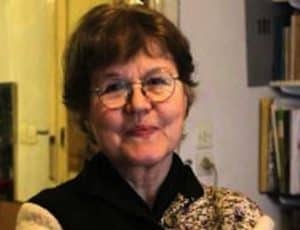 Necmiye Alpay is a Turkish translator, editor, and journalist who has devoted much of her career to improving the quality of written Turkish and is a staunch defender of free expression and a voice calling for peace between Turkey and the Kurdistan Workers’ Party (PKK). Alpay was arrested on August 31, 2016, in connection with an ongoing investigation into the pro-Kurdish opposition newspaper Özgür Gündem, for which she served as an advisory board member. The Turkish state shut down the paper on August 16 as part of the state of emergency in the country following the failed coup of July 15, stating that the outlet made “propaganda for the PKK,” which is listed as a terrorist group, and acted “as its de facto news outlet.” Prosecutors initially charged Alpay with “being a member of an armed terrorist group” and sought an aggravated life sentence for Alpay and eight other staff members of Özgür Gündem, including renowned writer and activist Aslı Erdoğan. On December 29, 2016, as the trial of those accused in the case started, Alpay was granted a conditional release from detention, and was released that evening under a travel ban. The travel ban was lifted for both Alpay and fellow defendant Erdoğan on June 22, 2017.

The main trial of Alpay and her colleagues continued intermittently for several years. During the fifteenth hearing of the main trial of the Özgür Gündem newspaper on January 13, 2020, prosecutors requested that Alpay be acquitted of all charges against her. In her final statement of defense, she said, “A verdict of acquittal to be given to us in this trial does not remove the sentences given. Freedom of press and expression is not adequately or openly expressed in the prosecution’s opinion as to the accusations in explaining the reasons for acquittal.” At the final hearing in her case on February 14, she was acquitted of all charges of making terror propaganda.

Necmiye Alpay is a linguist and writer often described as a living dictionary of the Turkish language. A 1969 graduate of the Ankara University Faculty for Political Science, she completed a doctorate in economics at Paris-Nanterre University and returned to Ankara University as a lecturer. While teaching in the Faculty for Political Science, she was arrested by those responsible for the September 12, 1980, military coup, and spent three years in prison. She started working as a translator following her release. She has written columns and articles in newspapers and journals such as Radikal, translated numerous works into Turkish, including those of Edward Said, Immanuel Wallerstein, René Girard, Paul Ricoeur, and Jan Marchand, and has written several books on the usage of language, literary criticism, and the peace process in Turkey.

Alpay agreed to become a member of the advisory board for the opposition newspaper Özgür Gündem after the publication had been experiencing harassment and government opposition due to its pro-Kurdish slant. Following an unsuccessful coup on July 15, 2016, Özgür Gündem was deemed a propaganda outlet for the outlawed Kurdistan Workers’ Party (PKK) and shut down on August 16. In the ensuing month, more than twenty staff members, including Alpay, were arrested due to their connection to the newspaper. Alpay was summoned to testify before prosecution on August 31 as part of the investigation against Özgür Gündem, and was subsequently arrested, accused of being a member of an armed terror organization, disrupting the unity of the state, and conducting terrorist propaganda. Alpay denied all accusations, stating that she has always been against violence and terror. Istanbul’s Eighth Criminal Court of Penal Peace ruled that she be detained pending trial because she was likely to flee the country. Alpay’s response to the accusations: “I want to say that the judge might be considering my efforts for peace a crime, but that is against all reason, too.”

On September 9, 2016, Necmiye Alpay sent a letter to PEN International from her jail cell, ending with: “Journalism is not a crime.” In the letter, she writes that she accepted a position on Özgür Gündem‘s advisory committee to support their freedom of expression, always hoping for a “peaceful solution to the Kurdish problem.” She states that the committee never had a meeting, and existed solely as a symbol. She calls on “all those who are responsible, and the government, to put an end to the politics of violence and repression, free writers and peace activists, recognize the right of criticism, begin to talk and negotiate with the representatives of Kurdish movements who declare themselves ready for that.” In another letter, written to Turkish President Recep Tayyip Erdogan on November 12, Alpay writes, “I am asking you to give us all our rights back. I hope that you use your will not for the state of emergency or the nationalists, but for a democracy suited for our times, implement the rule of law to end injustice and to seek a solution and peace that you once succeeded in during your premiership.”

On November 23, 2016, an Istanbul court dropped the charges of disrupting national unity against both Alpay and writer Aslı Erdoğan; however, the terrorism charges remained, and the initial indictment sought aggravated life sentences for Alpay and Erdogan, as well as seven other writers and activists associated with Özgür Gündem. On December 29, as the trial opened, Alpay was granted a conditional release from detention, and was released that evening. On June 22, 2017,  the travel ban that was imposed on Alpay was lifted.

A member of the Turkish Association of Translators and the Peace Foundation, Alpay was awarded honorary membership of the Swiss German PEN Center on September 14, 2016.

Write a Letter in Solidarity With Necmiye Alpay