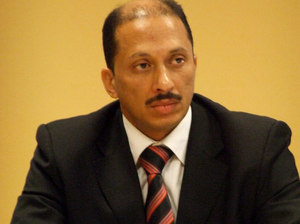 Mohammed Abbou was released on July 24th, 2007, the eve of the 50th anniversary of the Tunisian Republic. On October 22, 2007, Tunisian authorities prevented him from traveling to Cairo to attend and monitor the trial of imprisoned Egyptian journalist Ibrahim Issa.

Mohammed Abbou, an Internet writer, lawyer, and human rights activist, was arrested on March 1, 2005, for an article published on the Internet nine months earlier that denounced torture in Tunisia.

Following his arrest, Mohammed Abbou, who is a member of the National Council for Freedom in Tunisia  (Conseil National pour les Libertés en Tunisie, CNLT), was taken on April 9 to a prison in Tunis. Abbou was sentenced during the night of April 28-29, 2005, to two years in prison for an incident at a 2002 conference in which the lawyer allegedly attacked a colleague. Reportedly, no evidence was presented aside from an unsigned medical certificate. Tunisian lawyer and human rights activist Radhia Nasrawi has claimed that  “a number of witnesses would have been able to testify that no assault was committed during this conference in 2002.” Abbou was also sentenced to 18 months for “having published information that would disturb public order” and for “insulting the judiciary” in an article posted on the Tunisnews web site in August 2004, which compared torture committed against political prisoners in Tunisia to abuses carried out by U.S. soldiers in Iraq’s Abu Ghraib prison.

It is thought that Abbou’s arrest and the subsequent prison sentences handed down to him (which were upheld on appeal on June 10, 2005) are in fact linked to a February 28, 2005, article posted on the Tunisnews web site in which he ironically compared Tunisian President Ben Ali to Israeli Prime Minister Ariel Sharon.

French lawyer Guillaume Prigent, who was at the June 10, 2005, appeal on behalf of  Reporters without Borders, said that basic rights of the defense had not been respected. The hearing reportedly lasted only a few minutes and the judge began by sending the diplomats out of the courtroom for “making too much noise.” He then expelled the media and others, including the defendant’s wife, leaving only the defense lawyers and legal observers from foreign NGOs in the courtroom.

Mohammed Abbou went on a hunger strike for several days in July 2005 to, in his words,  “draw attention to what is happening in my country as regards the repression against all those who voice dissent.”

According to reports received by PEN, Mohammed Abbou began another hunger strike on March 11, 2006, to protest the deterioration of prison conditions since a March 2 gathering of protesters calling for his release.

Following that hunger strike, Abbou was subjected to various forms of harassment including attacks by prison guards who reportedly woke him and beat him in the middle of the night, searches, and threats to tarnish the reputation of his wife and family. Authority officials were reportedly instructed to harass Abbou’s wife, family and lawyers during weekly visits. On March 9, Abbou’s elderly mother was only allowed to see her son for three minutes despite not having seen him for three months. According to reports received by PEN, the prison authorities also incited Abbou’s fellow prisoners to harass him. According to an appeal issued by Amnesty International, Mohammed Abbou lost consciousness during a visit by his family on  March 30, 2006.

Freedom of Expression in Tunisia

PEN is particularly concerned that Tunisia began holding Mohammed Abbou prisoner at the same time that the Tunisian government was preparing to host the World Summit on Information Society (WSIS). In November 2005 governments, intergovernmental and non-governmental organizations, Internet service providers, and others gathered in Tunis to debate the digital revolution and ways to address the “digital divide.” The WSIS Declarations of Principles specifically referred to Article 19 of the Universal Declaration on Human Rights that guarantees freedom of expression. The arrest of Mohammed Abbou showed the host of the Summit to be in complete disregard of the summit’s principles. PEN asks the Tunisian government to demonstrate its commitment to the Summit’s principles by allowing Mohammed Abbou and all writers and journalists in Tunisia their fundamental right to freedom of expression.