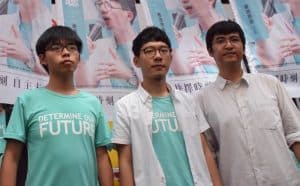 Joshua Wong, Alex Chow, and Nathan Law are three prominent student activists who played a leading role in the 2014 Occupy Central Movement in Hong Kong. All three were imprisoned in August 2017 on charges, initially leveled in 2015, of “unlawful assembly” or “incitement to take part in assembly” stemming from their roles in the protest at Hong Kong Civic Square in September 2014. On November 7, 2017, all three were released on bail, and the court set their appeal for January 2018. In February of 2018, Wong, Chow, and Law won their appeal. Since then, Hong Kong authorities have continued to harass the activists through filing further court appeals and pursuing criminal prosecution. Joshua Wong has been arrested on charges of unlawful organizing in June 2019 and was barred from running in local elections in October 2019.

In addition, on October 13, 2017, Wong pleaded guilty to charges of criminal contempt of court for failing to comply with an order to vacate the streets of the Mong Kok commercial district in November 2014.

Joshua Wong is the founder of the political party Demosistō, while Nathan Law is a former congressman (who was controversially removed from his post mere months after being elected) and Alex Chow is the former secretary general of the Hong Kong Federation of Students who is due to begin his doctoral studies at the University of California, Berkeley.

In September 2014, the three activists were involved in the storming of Civic Square, a fenced-off square located outside government buildings in Hong Kong. The storming of Civic Square was a response to reforms imposed by Beijing authorities that limited the pool of candidates considered for the position of chief executive, Hong Kong’s top leader. The protest is considered by many to be one of the catalyzing events for the Umbrella Movement.

As leaders of the Occupy Central movement, the three have faced legal punishment for exercising their rights to freedom of assembly and of expression. Human rights groups and other observers—including PEN America—have expressed their concern that these charges are politicized attempts to crack down on dissenting political expression in Hong Kong.

December 19, 2019: Joshua Wong claims that state-sponsored hackers seized text messages from his phone and provided them to Hong Kong police without a warrant. The authorities include Wong’s text messages in a list of evidence submitted to the court.

October 29, 2019: Joshua Wong, who has been arrested twice since mass protests in Hong Kong, is barred from running in local district council elections after an official said his calls for “self-determination” in the territory were inconsistent with pledging an oath of allegiance to the city and its constitution.

September 17, 2019: Joshua Wong and fellow activist Denise Ho testify before the Congressional-Executive Commission on China in Washington DC, and call for lawmakers to pass the Hong Kong Human Rights and Democracy Act.

June 21, 2019: Joshua Wong, while walking to a train station, is again arrested on three charges related to unlawfully organizing a rally that same day, at which protesters blockaded police headquarters for 15 hours. Wong is released on HK$10,000 bail following his first court appearance on the day of his arrest, with the condition that he obey a curfew from 11pm to 7am and report to the police once a week, and is also barred from leaving Hong Kong, with the exception of the two pre-arranged trips in September.

June 17, 2019: Joshua Wong is released early from prison after only serving a month of his two-month sentence. This came just one day after protests against a controversial extradition bill in Hong Kong that would have allowed the transfer of prisoners to jurisdictions HK currently lacks an extradition agreement with, including mainland China. Upon release, Wong said he would join the fight against the bill and called on the city’s Chief Executive Carrie Lam to step down.

May 16, 2019: Joshua Wong started serving his two-month sentence in prison on charges related to the 2014 Hong Kong protests, including contempt of court for refusing to leave a protest site.

April 3, 2019: Joshua Wong appeals his contempt of court charges. The court postpones judgment on the case, allowing Wong out on bail in the meantime after serving six days of his original three-month sentence.

July 4, 2018: A Hong Kong court rules against democracy activist Wong. The judge sides with the police officer’s claim that despite not putting Wong under arrest, the officer believed there was a “real need” for police officers to handcuff Wong at the protest. Deputy Adjudicator Simon Ho dismisses Wong’s claim and orders him to pay HK$8,062 in legal fees. Wong says he will appeal his case to a higher court.

June 7, 2018: Wong sues the Commissioner of Police for assault and false imprisonment due to the police officer handcuffing Wong prior to placing him under arrest. Wong seeks compensation of HK $45,000.

February 6, 2018: Joshua Wong, Alex Chow, and Nathan Law win their appeal, and the charges and jail sentence are dropped; however, the future sentencing guidelines for illegal protests have been harsher, which may include jail sentences. In another Umbrella Movement-related court case, Wong is granted bail. After failing to comply with an injunction to clear a Mong Kok protest site, Wong was charged with contempt of court and was sentenced to three months behind bars.

October 13, 2017: Joshua Wong is found guilty on charges of contempt of court.

July 14, 2017: Nathan Law is disqualified from his seat, alongside several other pro-democracy lawmakers, over allegations that they incorrectly took the oath of office.

October 2016: The Court of Appeal agrees to hear a government appeal against the original sentence.

September 2016: The Hong Kong Department of Justice requests a review of the sentences. The magistrate rules that the original sentencing and reasoning was sufficient.

In the September elections, Nathan Law is elected as a member of the Hong Kong Legislative Council, becoming the youngest elected candidate in history.

August 2016: After the Beijing-backed local government successfully pushes for harsher punishments, the original sentences of the three activists to community service are appealed. Joshua Wong is instead sentenced to a prison term of six months, while Nathan Law and Alex Chow are given eight and seven months, respectively. Their prison sentences preclude them from running for any public office for five years.

April 2016: Joshua Wong, alongside 19 others, is summoned on charges of contempt of court for obstructing the execution of the court’s order for clearance of the central commercial area in Mong Kok.

August 2015: Wong, Chow, and Law are formally charged with “unlawful assembly and incitement to take part in assembly.”

The convictions of Wong, Law, and Chow have occurred against a backdrop of diminishing civic freedoms for Hong Kong. PEN America has documented the shrinking space for media diversity in the territory, and the 2016 kidnappings of five booksellers by security officials from the Chinese mainland. In November 2016, PEN America sent a publisher’s delegation to Hong Kong to present and discuss the findings of the report on the kidnapping of the booksellers; in this time, they met with Nathan Law and other legislators and free expression advocates.

Joshua Wong in particular is a high-profile activist and has been subject to several formal and informal restrictions on his freedom of expression. In October 2016, Wong accepted an invitation to travel to Thailand to speak about his experience of the Umbrella Movement at an event hosted by Chulalongkorn University. Wong was detained upon arrival, and after 12 hours was deported to Hong Kong. Wong claimed that the authorities would say no more than that he had been blacklisted. In addition, in July 2017, PEN Hong Kong (the Hong Kong chapter of PEN International) was refused the opportunity to launch a literary anthology at the Asia Society Hong Kong due to their proposed inclusion of Joshua Wong as a speaker.

In a series of tweets made on August 17, Joshua Wong expressed his faith in the spirit of Hong Kong activists, stating, “They can silence protests, remove us from the legislature and lock us up. But they will not win the hearts and minds of Hongkongers.”

Joshua Wong has written a series of articles for The Guardian:

“I’m a Pro-Democracy Activist. Is That Why Thailand Chose to Deport Me?”

Writing on the Wall: Disappeared Booksellers and Free Expression in Hong Kong

One Year On, Hong Kong Publishing Industry in Jeopardy After Bookseller Abduction

Attacks and Censorship in Hong Kong

The PEN Pod: Diving Beneath the Waves with Carmen Boullosa

The PEN Ten: An Interview with Genevieve Hudson

The @ACLU is challenging two Puerto Rican laws that criminalize the sharing of information about emergencies that the government decides is “fake news.” Read PEN America's statement here: https://bit.ly/39XxaIG
https://bit.ly/2yjucBk

[email protected] is testing a new feature limiting who can reply to your tweets; a step that could assist users in better protecting themselves from #onlineharassment on the platform.
https://bit.ly/2A0pPvK