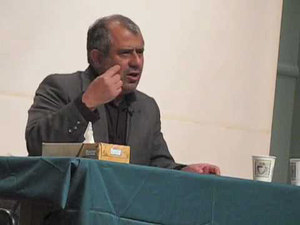 Eshkevari was released from prison on February 6, 2005. He was freed after serving two-thirds of his seven-year jail term. A condition of his release is that Eshkevari will no longer be permitted to wear the cleric’s robes.

Hojjatoleslam Hasan Yousefi Eshkevari is a researcher, journalist, cleric, director of the Ali Shariati Research Center, and contributing editor of the now-banned newspaper Iran-e Farda (The Iran of Tomorrow ). Eshkevari trained as a clergyman in the religious and cultural center of Qom and has devoted much of his life to study and writing. He has published extensively in scientific, religious and intellectual journals, and has been an acclaimed contributor to the Great Encyclopedia of Islam and editor of the Encyclopedia of Shi-a . He has translated several books, and his own publications include A Hundred Years of Iranian History 1879-1979 (Qom 1974), Justice in the Monotheistic Worldview (Qom 1975), Broken Idols: An Analysis of the Foundations of Twentieth Century Civilization (Qom 1977), A Review of the Study of Creation: Issues in Islamic Anthropology (Tehran 1997), Religious Revivalism: Analysis and Criticism of the Contemporary Islamic Movement: Interviews with Ten Political-Cultural Figures (Tehran, first edition 1998, second edition 1999), Wisdom in the Feast of Religion (Tehran 2000), and In Memory of the Days: Political Approaches of the Reformist Movement in Iran (Tehran 2000).

Eshkevari was arrested on August 5, 2000, in connection with his participation at an academic and cultural conference held at the Heinrich Böll Institute in Berlin on April 7-9 entitled “Iran after the elections,” at which political and social reform in Iran were publicly debated. He reportedly learned that a warrant had been issued for his arrest shortly after the conference, but had gone to France to receive medical treatment before returning to Iran.

Eshkevari’s trial began behind closed doors on October 7, 2000, in the Special Court for the Clergy. He is believed to have been charged with “acting against national security” in connection with a speech he gave at the conference, and also with “defaming government officials in articles,” “starting a campaign against the system,” and “denying and insulting the holy religion of Islam.” He was also reportedly charged with “declaring war on God,” “being corrupt on earth,” and apostasy, three charges which carry the death penalty. His trial ended on October 17, 2000, and he was reportedly convicted, but information was not made immediately public about the sentence passed on him. In early March of 2003, an appeals court upheld a seven-year sentence against him. Mr. Eshkevari was given four years for his comments about veils, one year for attending the conference and two years for speaking against the Islamic Republic.