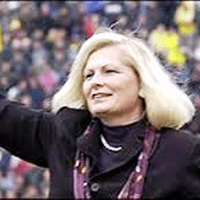 Born in 1949, Flora Brovina is a Kosovar-Albanian pediatrician, poet, and women’s rights activist. She was arrested on 20 April 1999, during the Kosovo War, and held in captivity in Serbia while NATO forces took over the capital and Serbian troops withdrew from the country. Her son managed to contact PEN International with an urgent appeal to spread the news of her arrest. On April 24, 1999, the news broke, and she was transferred from an unknown location to a Serbian prison in Požarevac. There she was subjected to over 200 hours of interrogation, which included physical and psychological torture over the course of several weeks. She was put on trial for “terrorist activities” in 1999, and sentenced to 12 years in prison under Article 136 of the Yugoslav Penal Code. In 2000 she received the PEN/Barbara Goldsmith Freedom to Write Award and was released a year later, following international pressure and the fall of former Serbian president Slobodan Milosevic.

When former president Slobodan Milosevic ordered a crackdown on ethnic Albanians in Kosovo, Flora Brovina refused to leave, remaining instead to give medical care to besieged inhabitants. Her accomplishments during this time included setting up hospitals and clinics in private houses to help Albanian women give birth. This drew the ire of Milosevic’s government, which saw her activities as akin to helping give birth to terrorists. She was arrested, forcefully taken by plain clothes policemen loyal to Milosevic, and held in an undisclosed location. She was released following the fall of Milosevic in October 2000, after serving less than two years of her prison sentence.

Since then, she has used her medical training to assist the Albanian communities that were marginalized by Milosevic, who had ruled that Albanians could not perform government jobs or use public services, such as hospitals. She has also set up a center for orphans of the war, with the help of Oxfam. In 2001 she ran for president under the banner of the Democratic Party of Kosovo (PDK).

ICYMI: On #thePENpod, PEN America CEO @SuzanneNossel discussed how the U.S. can do more to support democracy, the free speech implications of Texas’s new abortion law, and how book bans are part of a larger trend to police the freedom to learn. https://bit.ly/3nZwIV3

Instead, I will be speaking at @PENamerica’s #BannedBooksWeek event in Austin on Sept. 28, and @BryanBurrough will speak at one in Dallas on Sept. 29. https://pen.org/events-calendar/? We stand for #FreeSpeech and will never submit to any oppressor.