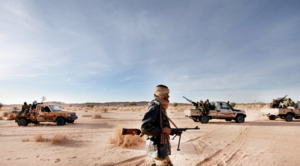 The first thing you must do
when word of the rebel army’s advance
reaches your mud-brick home
is surrender your hope
to see the Great Messi
play futbol tonight
on your new used television.

Then you must remove your Barça jersey
and pull on your sun-bleached bagzan
and wind your linen turban around your face
and hide your qautre-qautre inside the sheep kraal
and take out the battery
and the starter motor
and pray that your neighbors who watched,
the Moor salt trader and the Songhai woman,
do not betray you to the young thieves
who now roam the city.

Then you must go to the market
to find the Berber trader
who has coveted your TV,
though he prefers Ronaldo,
and beg him to accept it
for a barrel of petrol
and pray that he will not
send his sons to your house
to strip the copper wiring
from your walls once you leave.

Then you must go to the mosque
to ask about the bank,
which has been ransacked,
and about the small shops,
which have been emptied,
and about phone credit,
which no one has,
and about the military,
which has fled south,
and about the boys,
who, still wearing their futbol jerseys,
have emerged from the abandoned barracks,
slinging rifles over their narrow shoulders,
balancing boxes of bullets on their shaved heads.

As you hurry home,
you pass the library,
where scholars are heaping ancient books into a salt truck,
and the animal market,
where there are no camels, donkeys or sheep,
and the hotel,
where there are no tour guides discussing Barça, Real, or Man U,
and the cemetery,
where the city’s 333 saints, may Allah be praised,
lay slumbering in their linen shrouds beneath the earth.

The last thing you do,
after your children tell you
that they have heard
the big voice of the rebel guns,
is re-attach the battery
and the starter motor
and load your blind father
and your weeping wife
and your wide-eyed children
and your brother’s grieving wife
and her fatherless children
into the qautre-qautre.

When you drive into the glare of the sun,
now descending into the desert,
you will fail to note that the far-off match has begun
and that the Great Messi has mounted the pitch
under the honeyed light of a galaxy of artificial suns,
because you will be praying for Allah to deliver you
to a foreign land uninfected by violence,
where you will find reliable wells,
where the traders won’t cheat you,
where you won’t have to pay too many bribes.

As the slopes of the great dunes rise
and your bald tires slip in the soft sand,
your father, who disapproves of futbol,
will remind you in his thin voice
that he has fled the city many times.