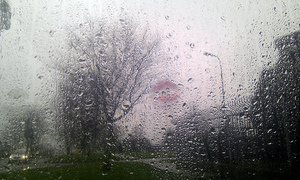 This week in the Guernica/PEN Flash Series, we feature a piece by Miles Klee. Subscribe to the series and get new flash delivered to your inbox twice a month—no spam or news, just stories.

The way it is, our life ends tomorrow. You know this. Today it’s raining. Well. That day just days before that day, it snowed out of a sun-blind sky. What does that mean? Come on, you know it sounds good. Sounds good, I’m saying, I said. I said if that’s the way it is then you know what that’s enough already. I don’t want to be fighting you or walking with you past other fights, that’s an overly common pastime. I don’t see any gain to it. A fight doesn’t hotly compress my thought so I can get on with life. Not that there’s any rush, mind. I hate when it’s just rained and everything in the city shines. You knew it wouldn’t last, the rain, you said—and that’s just it, you’re a know-it-all. You have to actually know it all. My father always called me one, and now I know what he meant. You know the hotel on this block? Let’s go. Money burns a hole in my heart. I love you and none of this other shit. The hotel showers are enormous. Let’s switch places with other people, make them pretend to be us. Don’t you ever just need a break. I think it really may rain again. I think if I popped you a bunch of snakes would wriggle out. Well go on then, you can say something, I think. I’m giving you permission, I said, knowing exactly how much it would irk you. So we kill each other tomorrow—nothing passionate there. We should do some kind of warm-up. Snatch a purse, maybe rob a bank. Assault a couple of passers-by. For the very crime of passage, of course. It used to be hard to get place to place, I said that day, or meant to. You know. (Words about clouds or even birds might do quite nicely here.) Yesterday, or it might well have been the day before, I read about a planet with rings two hundred times the size of Saturn’s. I realized I had no fucking clue how big the rings of Saturn are. It’s not as if I can tell you anything about space. Something else I’m sure I’ve read, sure I’ve read about, is of a city exterminator saying rats of age and experience are really basically literate. I imagined, then, a literate rat, reading up on rats like himself. “So that’s what I’ve been doing,” the rat would realize. I don’t know where I read this and I have never been able to find the quote again. It’s altogether possible I dreamed it. I hate my dreams, they’re far too realistic, mornings I have to ascertain how much of them is true. I’d rather not think about rats, reading. Let’s please not make a scene, please. We both know you’ll burn yourself cold. Forget we ever tried to talk.