A Stand for Democracy in the Digital Age 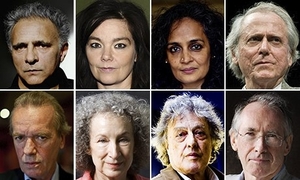 Systematic mass surveillance, with the dangers it poses to democracy, is one of the most explosive issues facing us in the 21st century. PEN has already reacted to these challenges with the PEN Declaration on Digital Freedom, and our survey of over 500 American writers offers proof that the growth and proliferating uses of surveillance technologies are impinging upon freedom of expression and creative freedom

In this appeal, the writers demand a binding “International Bill of Digital Rights” and call upon the United Nations to enforce fundamental democratic rights such as the presumption of innocence and the right to privacy in the digital realm.

Please join this major, global writers’ initiative by adding your name. The full text is below:

A Stand for Democracy in the Digital Age

In recent months, the extent of mass surveillance has become common knowledge. With a few clicks of the mouse the state can access your mobile device, your email, your social networking and internet searches. It can follow your political leanings and activities and, in partnership with internet corporations, it collects and stores your data, and thus can predict your consumption and behaviour.

The basic pillar of democracy is the inviolable integrity of the individual. Human integrity extends beyond the physical body. In their thoughts and in their personal environments and communications, all humans have the right to remain unobserved and unmolested.

This fundamental human right has been rendered null and void through abuse of technological developments by states and corporations for mass surveillance purposes.

WE CALL ON ALL STATES AND CORPORATIONS to respect these rights.

WE CALL ON ALL CITIZENS to stand up and defend these rights.

WE CALL ON THE UNITED NATIONS to acknowledge the central importance of protecting civil rights in the digital age, and to create an International Bill of Digital Rights.

WE CALL ON GOVERNMENTS to sign and adhere to such a convention.