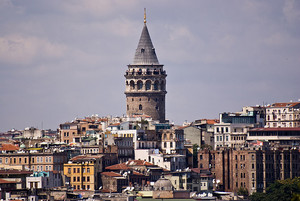 She fucks a Sailor, a Turkish sailor, the summer she spends in Istanbul. When she comes home to Wisconsin, it takes her three days to come clean about it to her husband.

Now, she becomes angry, and asks him why he assumes she did not consider leaving him for the sailor. Besides, she says, she and the sailor shared a Muslim cultural identity, something she does not share with her husband. She asks him if he thought of that.

Plenty! she shouts at him. She had plenty in common with the Turkish sailor.

Her husband wants to know what she had in common with the Turkish sailor.

She had nothing in common with the Turkish sailor except that she was attracted to him and he was attracted to her and they spent a night in an unairconditioned room in Karakoy, by Galata tower. In the morning, she woke up to the sound of seagulls circling the tower, zooming around it hungrily, loudly. The Turkish sailor had heard the seagulls too. Then, she had left. That was really all they had in common: the cultural identity, the sex, and the seagulls.

Her husband refuses to say any of it. His refusal is quiet, itself not angry.

When she sees him placidly gazing at her, and refusing to say any of these things, she understands that this is his way of getting back at her for fucking the Turkish sailor.

And she also understands that this, his lack of passion, his sense of logic, is one of the reasons she fucked the Turkish sailor, and, it is also the reason she came home.

I'm shocked and distressed to see my friend @SalmanRushdie has been attacked before a talk. He's a good man and a brilliant one and I hope he's okay.

I hope Salman Rushdie is okay.