A Prayer for Rockers 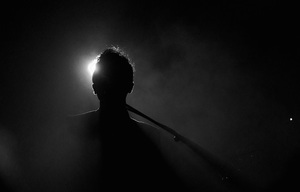 Music is the primal art, and the appeal of writing is through the ear. The Muse sings in the poet. Music and writing are connected. My prayer for writers is a prayer for rockers.

I’m writing this to Patty Smyth singing “Goodbye to You.” You’ll see why.

Rock music inspires achievement, struggle, action. It thunders in the stadium—We will rock you!—and sends us out on the field cheering, ready to play the Super Bowl. A better prayer than this would be a rock song.

Musicians are typically outsiders, rebels: Johnny Cash, Joan Jett, Sid Vicious demonstrate the proper stance of the artist: wild and free and beholden to no authority.

But the rebel spirit of rock has a cost. It’s often a by-product of great personal pain.

I last saw—and heard—Nick D around eight years ago. He was playing with his band in the basement of a bar on Avenue A. He still had his van, the one he helped me move with. Hannah, his girlfriend, in a revolutionary’s black beret and cargo pants, was there too.

When he was picking up his amps after the show, I put my hand on his back. He looked gaunt in his black flapping t-shirt, but he had a shocking hidden hump of muscle in his back you never would have guessed at, like Hemingway’s hero in For Whom the Bell Tolls. The Pilar rests her hand on his shoulder and says, “You’re stronger than you look. Good.”

Hannah knew about Nick’s strength. “He is Superman,” she said once. I knew better than she did. I’d seen Nick stay at work and unload a container truck full of furniture at the end of a long day more or less single-handedly after the rest of us had quit. Unbelievably, he had been sick at the time, and went home with a 102-degree fever.

When I asked him where he got his work ethic from, he told me he was emulating his father, an accountant, who had never missed work. I would learn that Nick was adopted, that Mr. Derecchio was not his real father. But both Nick’s adoptive parents had treated him with extraordinary love. They gave him another chance each time he fell back into heroin use and reverted to all the lying, stealing, destruction, and betrayal-of-loved-ones that goes with addiction. Feel bad, do heroin, hurt the people you love, hurt yourself, feel worse. Nick broke their hearts, served three years in an Ohio prison, but they didn’t forsake him.

In fact, I see now that Nick’s remarkable working strength came from pain, guilt, self-hatred, love, despair. In one of his songs for his band, All Terrain, he sings, “I’m not the one who’s going to win.” He knows himself. Tragically, even Hannah felt she had to leave him. He stopped answering my emails too. I think he can’t bear disappointing anyone else. But I love him.

Nick is a creative man—a musician. In all their pain and self-destruction, I pray for our musicians, because they give us the great gift of rock. When a musician’s inspiration comes from pain, it may be naïve to wish him happiness. Sometimes you just have to say goodbye to him. Rather, I pray for Nick’s unhappiness to find its most productive outlet—in one more song before he leaves us.