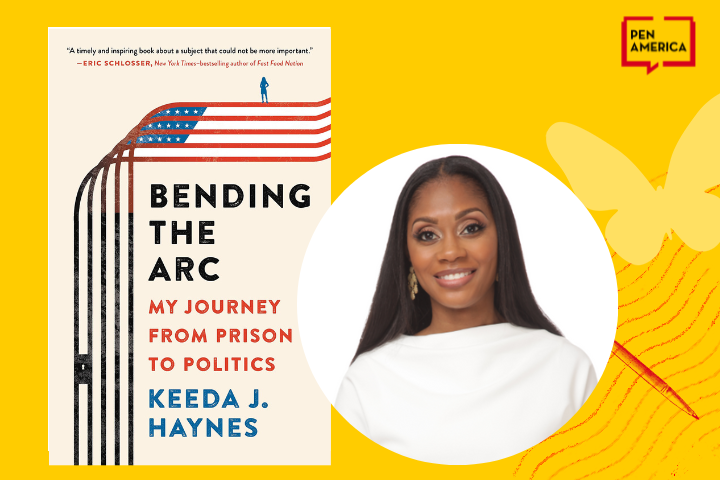 Written with compelling authenticity and brimming with honest dialogue, Keeda Haynes’ debut memoir feels like the author is speaking directly to you. In Bending the Arc: My Journey from Prison to Politics (Seal Press, 2021), Haynes gracefully recounts the story of her life: from growing up in Tennessee and working as a correctional officer in a local jail to serving time in federal prison for a crime she did not commit, attending law school at night, becoming a public defender, and running for Congress. Woven throughout her memoir is evidence of the incomparable power of love and support from family, mentors, and friends. Facing a system and its actors that wish to diminish, punish, and criminalize her, Haynes finds a community that not only believes in her innocence, but also her potential to impact positive change on a large scale.

Growing up in the small town of Franklin, Tennessee in the 1980s and 1990s amidst a large family, Haynes strives to forge her own path through self-determination and education: “I learned quickly that the best route to happiness was the one I could define for myself.” Her love of reading and her deep sense of curiosity inspired her to study criminal justice and psychology at Tennessee State University. Coinciding with her studies and driven by her determination to understand why people commit crimes, Haynes begins working as a correctional officer at the County Sheriff’s Department. The experience quickly awakens her to the realities of the criminal legal system: “In some ways, it almost felt like we were being prepared for war: ‘us,’ the officers, the authority figures, versus ‘them,’ the population we were tasked to ‘control’.” Resisting this “us vs. them” mentality, Haynes remains “determined to lead with humanity first.” The experience diverts her curiosity in a different direction, towards understanding “who was in prison, and why they were actually there.” Little to her knowledge, Haynes would later know the feeling of being on the other side of the warline, this time serving a sentence of her own.

The summer before college, Haynes becomes involved with a young man who later asks her to sign for some packages for him. Under the impression that the packages contain electronics, Haynes is shocked when she is pursued and indicted by the FBI during her final year in college as part of a large-scale drug conspiracy, spearheaded by her boyfriend and his cousins. She recounts, “It was a surreal parallel: dissecting law cases with Professor Woods in class, then leaving school and going over my own case in preparation for my trial.” Haynes eventually completes her degree with honors, but while most of her classmates are exploring career options or considering graduate school, Haynes begins her seven-year sentence in federal prison.

Integral to Haynes’ retelling of her story is her commentary on the shocking commonality of her experience within the criminal legal system. Haynes delves into the realities faced by many Black women and girls in the system, exposing the harmful assumptions, portrayals, and treatment that strip them of not only their humanity, but also their right to declare their own innocence:

Too often for Black girls, our awareness of the “real” world—including knowing the sinister, the illegal, the uglier parts of it—is assumed as a given by society…And for Black women, we are saddled with an added layer of unique discrimination, based on our gender… It’s called adultification bias, and it’s leveled specifically against Black girls, who are often deemed by adults as less innocent, less deserving of empathy, and more adultlike than white girls of the same age.

During her trial and sentencing, Haynes is repeatedly punished for maintaining her innocence. However, instead of pushing her to make a false admission of guilt, these injustices only fuel her determination to promote change: “What would make this hell worth it for me was sharing the hard lessons I should never have had to learn. And turning those lessons into action.”

After serving four years in federal prison, Haynes is faced with the stark reality that her sentence is not over. Narrated with precision and grit, Haynes outlines the many obstacles she faces as a person labeled “felon”—the “scarlet F,” as she calls it: “This was not the end of my prison life; I was simply moving into the next evolution: from incarcerated to formerly incarcerated. Free, but not free.” Haynes’ accomplishments—becoming a public defender and running a campaign for Congress—are just the beginning of her fight to promote meaningful change for people impacted by the criminal legal system. The determination Haynes voices in her memoir to confront the injustices she has experienced is echoed in her words and her actions. Bending the Arc is not just a retelling of her life, but a call to action, as “achieving real justice requires applying constant pressure. And not just by a few well-intentioned individuals. Bending the arc will take a movement. A movement that reimagines justice by first acknowledging the humanity in people.”

Emma Stammen talks with Keeda J. Haynes about what inspired her to share this compelling story, working in the legal system after her incarceration, and the experience of revisiting her time in prison 18 years later on PEN America’s Works of Justice podcast.

Emma Stammen is a policy associate for The Bail Project, and a former postgraduate fellow with PEN America’s Prison and Justice Writing. She received her BA with honors from Scripps College, where she majored in Feminist, Gender and Sexuality Studies and English. Emma was previously a research fellow at The Sentencing Project, and has also worked for the Correctional Association of New York and The Seattle Clemency Project.