A Lunar New Year in Flames 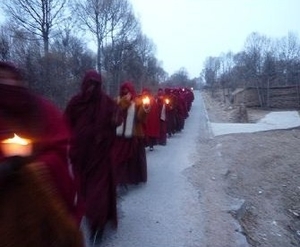 This weekend, millions of Chinese citizens will board trains for long journeys from the cities to their hometowns to be reunited with their families for the lunar new year. To the west and up the mountains, on the high plateau of Tibet, the lunar new year—Losar, in Tibetan—will also be observed. After a tumultuous year in which 86 Tibetans have set themselves afire, however, celebrations will be muted, if they occur at all.

Last week, a Tibetan monk from Kirti Monastery in Ngaba Tibetan Autonomous Prefecture, Sichuan Province, was sentenced to death for allegedly inciting others to self-immolate. Seven others received sentences ranging from 3 to 12 years in jail for so-called “intentional homicide,” the charge authorities are now using to try to deter the immolations. The monk, Lobsang Kunchok, received a two-year reprieve, which could mean that the sentence will be commuted to life in prison. At PEN we mostly talk about freedom of expression as it relates to words. But for a people shut off from the world, as much of Tibet currently is, and after years facing cultural annhilation, fire as voice has taken hold as a last-ditch effort to be heard, and may not be stopped by those same heavy-handed tactics.

In December last year, eight Tibetan students were sentenced to five years in prison for organizing demonstrations in Tsolho Prefecture in Qinghai Province calling for linguistic rights after authorities distributed pamphlets encouraging educational instruction in Mandarin and calling the Dalai Lama a “political itinerant who wants to split the Chinese Motherland.”  According to the New York Times, the pamphlet also condemned self-immolators as puppets controlled by “foreign imperialist forces.” That protest was brutally suppressed.

And earlier in 2012, a school-aged girl named Tsering Kyi self-immolated. In 2010, she had participated in demonstrations to protest new Chinese-language textbooks and the decision to limit Tibetan to a single class. Authorities later called her mentally unhinged.

As we described in Monday’s case study, policy restricting cultural expression extends to all areas of Tibetans’ lives. Text messages, Internet access, and cell phone service are often blocked in some areas, and are heavily monitored throughout the region.Tibetans are often harassed and detained for listening to pirated foreign radio and television broadcasts or listening to or downloading  a number of Tibetan songs and ringtones, which are banned.

One ethnic Tibetan police officer in the Tibetan capital, Lhasa, recently described the conditions under which his people are living as an “open-air prison.”

This New Year, Tibetan leaders in exile in Dharamsala have asked Tibetans around the world to celebrate in a more subdued manner, and to “kindly pray for all who have sacrificed their lives and for all who continue to suffer” under a tightening grip. Prosecuting Tibetans for utilizing the only form of expression they feel they have left is not the answer to ending these self-immolations. Instead, authorities should end all restrictions on expression, and allow Tibetans the freedom to write, to speak, and to tell their own story—whatever it may be.