A Land Where the Storyteller is the Story 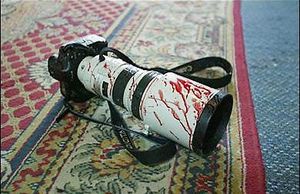 The following originally appeared on the Dissident Blog, a project of Swedish PEN.

What actually happens to the people in a country under the yoke of violence? The image of Mexico as a violent country risks ultimately becoming a self-fulfilling prophecy. Jennifer Clement—poet, author of several works of creative nonfiction and in-depth reports, and until recently president of the Mexican PEN—reflects on the real violence and its shadow online.

For Mexicans today, it is hard to interpret the words around us.

In these sad and crazy times, we read newspapers where messages from the drug traffickers are published beside the real news. In the classified section, narco messages appear in the broken thumb language of text messaging.

We read the writing on walls and on the enormous white cotton sheets that hang from bridges and trees covered with messages. In news coverage we try to decipher letters that were pinned to kidnapped people or to dead bodies. We try to read words actually carved into the skin of victims as if it were paper—across a belly or down an arm. We read skin graffiti.

In October 2010, after the assassination of photojournalist Luis Carlos Santiago, some narco graffiti appeared on a wall in Juárez signed by the La Linea Cartel. It stated: “Nosotros no matamos periodistas” (We do not kill journalists). It was a highly unusual declaration, written on a white wall in red spray paint to look like blood.

I logged on to the Blogdelnarco, an internet site covering stories that the mainstream media feel too threatened towrite about, to see the response to this new graffiti. Blogdelnarco is a place where all sides seem to communicate—drug traffickers, law enforcement, and ordinary citizens. This controversial site contains everything from violent videos of torture and decapitations to a section on Mexican narco ballads, corridos, and even narco jokes.

Regarding the ‘We do not kill journalists’ graffiti, I found 390 posts. They were not about the message itself or the violence against journalists. They were 390 vitriolic and sarcastic comments about the abominable spelling and poor syntax of this graffiti.

One blogger said he was “ashamed by the narcos’ lack of education.” He continued, ‘”Even our narcos are Third World.”

Another said, “It is not the alphabet that kills: bullets kill.”

One person wrote emphatically that she preferred to read the messages and graffiti from the rival cartel because “at least they know how to spell.”

After I read over more than 100 outraged comments, a sheepish and mortified ‘spelling apology’ was posted, which might have been placed there by the cartel. To this expression of regret one blogger answered, “You criminals are so good at killing you’ve even killed the Spanish language.”

Yes, these are sad and crazy times for Mexico. It is a country that is a victim of corruption, U.S. drug consumption and amoral gun selling, poverty, and human trafficking, where the constant killing of journalists means that the storyteller has become the story. But we cannot think that this, that seems so specific, is Mexico. No. This is the world we are all living in.