A Cosmologist of Language: On Translating Magnús Sigurðsson 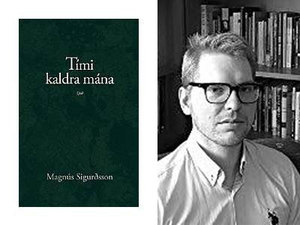 Meg Matich is the recipient of a 2015 PEN/Heim translation fund for her translation of Cold Moons, a collection of poems by Magnús Sigurðsson. Read an excerpt of the translation here.

In his poetry collection Cold Moons, Magnús Sigurðsson describes the world he wishes for, a world that emphasizes learning from the green world, and paying attention to the minute revelations of nature rather than allowing the crudeness of machinery to bulldoze our sentiments. Through intricate wordplay and a titanic understanding of his native Icelandic, Sigurðsson is able to create tiny but arresting artifacts—fragments that scale an instant to an aeon, and a thousand millennia to a second. He is a cosmologist of his native language.

Not only do his poems act as explorations of the natural world and the “landscape of the imagination,” but they also highlight the flexibility of Icelandic, and the history of the relationship between the land and its people. Take, for example, the Icelandic word að ykrja, which the poet uses on numerous occasions; it means both “to compose verse” and “to till the field.” The dynamism of the context in which he places such words allows them to embody the fullness of their meaning.

Each word—down to the hooked tail of ð on the page—is a tiny black seed, sewn into the mind and the page. Some poems are only six words long—a bold move drawing attention to necessity and possibility. His ability to create such elaborate poems from the leanest of material is, partly, due to his knowledge of the history of Icelandic, and his affinity for neologisms.

For example, in his poem “Ósk” (“A Wish”), the nouns—ljóðrænu, ljóðgrænu, vélrænu—apart from rhyming, are all in the accusative case, implying the omitted words “I wish for.” Ljóðgræna, a neologism playfully constructed from ljóðræna (that which is poetic, lyrical), here implies “green[ness]” (-græna)  as fundamental to poetics, at the same time demanding ecological awareness. Finally vélræna, also a neologism, from the adjective vélræn (automatic), echoes, and contrasts, the first word of the poem. From the root vél (machine), Sigurðsson constructs a word that encompasses one of the overriding themes of Cold Moons—the unchallenged myth of progress through machinery—by invoking the latent meaning of ræna here as a “state of mind” or even “essential quality.” Thus ljóðræna and vélræna are positioned as polar opposites.

In Sigurðsson’s poems, even the smallest creature is immense. His poem “Evolution (1),” for example, doesn’t elaborate on evolution anthropocentrically. He simply gives us a dwarf wasp, with a one-millimeter wingspan. He holds it up to a camera lens, juxtaposing technology with nature. He marvels at the dwarf wasp’s wings, beating “300 times per second.” Yet, he writes, it has taken “millennia” of “steadily evolving technology” to enable a camera to capture this tiny creature in a photograph. Meanwhile, this creature has existed despite our ability to see it (“capture” is an ominous word, here). It exists apart from in(ter)vention, evolving naturally into a creature that isn’t “useful” or “crafty” or “clever” in the way that devices are, in the way that structures are.

I’m drawn to the solicitude of Sigurðsson’s poems. They have the sparseness of a newly tilled field, sowed by a farmer with only a handful of seeds, using only what is essential. As they bear fruit, they create space on the page—the “white field”—and generate more seeds from that fruit—which are then replanted (or grow on their own)—next season, yielding a new crop. But as Sigurðsson pushes your attention toward the text, he draws your attention to what isn’t there. The white page is shocking; it is the surprise of seeing—and really seeing—white space, the margins yielding infinitely expanding possibility. Ultimately, his poetics is one of schemes of recurrence: what has happened once—by the simplest and most exquisite chance—becomes more likely with each occurrence. When the harvest is over, the barren field must be replanted, with new words. And the “leaves [drip] ancient rain.”

Meg Matich is a poet and translator, and a recent graduate of Columbia’s MFA program. Her translations have appeared in or are forthcoming from Exchanges, Words Without Borders, Absinthe, Asymptote, and others. She was a finalist for the 2015 ALTA fellowship, Iowa Review Poetry Prize, and others, and has received grants and fellowships from Columbia University, the DAAD, and the Banff Centre.