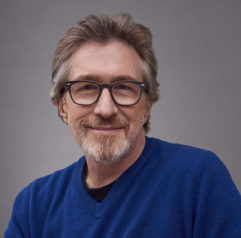 Don Katz is founder and executive chairman of Audible, Inc., the leading creator and provider of premium audio storytelling. Prior to founding Audible, Katz was a journalist and author for twenty years; his work won a National Magazine Award, an Overseas Press Club Award, the Chicago Tribune Heartland Prize for Nonfiction, and was nominated for a National Book Critics Circle Award, among other prizes.

Founded in 1995 and headquartered in Newark, NJ since 2007, Audible serves millions of listeners and offers over 600,000 downloadable Audible Originals, audiobooks, audio editions of periodicals, and other programs.  The company, under Katz’s leadership, commercialized the first portable digital audio player in 1997, four years before the introduction of the iPod.  Audible is the supplier of audiobooks to Apple’s iTunes store worldwide and operates 10 audio services beyond audible.com in the U.S.: audible.co.uk, audible.de, audible.fr, audible.com.au, audible.co.jp, audible.it, audible.ca, audible.in, audible.es and Audible Suno. Audible was publicly traded on NASDAQ until acquired by Amazon in 2008 and is now an Amazon subsidiary.

Recognized as one of America’s Top 25 Disruptive Leaders by Living Cities for his work on behalf of urban transformation in Newark, Katz was named New Jersey’s most influential tech leader by ROI-NJ in 2021 and was also named No. 7 on the 2020 NJBiz Power 100 list.  He was the recipient of a Tribeca Disruptive Innovation Award in 2013. The story of Audible, a Business 2.0 magazine profile contends, is “precisely the kind Katz would have loved to write, complete with its big ideas about how an audacious writer turned businessman hopes to spearhead a literary revolution by reviving the ancient art of oral storytelling using modern technology. But Katz himself is the story now.”

During his years as a professional writer, Don Katz wrote The Big Store: Inside the Crisis and Revolution at Sears (1987); Home Fires: An Intimate Portrait of One Middle-Class Family in Postwar America (1992); and Just Do It: The Nike Spirit in the Corporate World (1994). Katz also served as a contributing editor for Rolling Stone, Esquire, Outside, Sports Illustrated, Men’s Journal, and Worth. A two-volume collection of Katz’s magazine stories, King of the Ferret Leggers and Other True Stories and Valley of the Fallen and Other Places, was published in 2001; Home Fires was re-released in 2014.

Katz graduated in 1974 from New York University, where he studied with novelist Ralph Ellison; he attributes his fascination with audio to Ellison, who emphasized the role of oral and vernacular culture as a fundamental underpinning of American literature. Katz also attended The University of Chicago as well as The London School of Economics, from which he holds an MSc Economics. He served as a member of the public library board in Montclair, New Jersey for nine years, and has served on the board of Uncommon Schools, a nonprofit organization that manages several of the most outstanding urban college preparatory charter schools in the Northeast, since the organization was founded in 1997. He also served as both a member and chairman of Newark’s economic development corporation, and he is the founder of Newark Venture Partners, a social impact early-stage investment fund and ultra-bandwidth accelerator that seeks to connect Newark – Audible’s global headquarters – to the early-stage technology start-up innovation economy. Katz is married, the father of three children, and an avid ice hockey player.

CONFERRAL OF THE AWARD BY SENATOR CORY BOOKER

CORY BOOKER: Thank you, Faith. It’s great to be back in person to celebrate free expression and the people who keep it possible.

Congratulations to PEN America on 100 years of promoting literature and defending human rights. The support you give to writers at risk worldwide, your defense of free speech and press freedom, the work you do to amplify voices that have been too long ignored or suppressed, and so much more – this is so crucial to defending our democracy today and for the future.

PEN America could not have selected a better honoree than my friend Don Katz, founder and executive chairman of Audible. I’ve known Don for 25 years; we first met when Audible was just two years old.

It’s incredible to see how Audible has soared under Don’s leadership, reshaping the way millions of people around the world experience books and stories and creating opportunities for authors, actors, producers and other creative professionals.

Audible was one of the first major companies that moved its headquarters to Newark when I became mayor.

When Don brought up the idea, many saw it as irrational. But Don saw the worth, dignity and strength of the city. He understood that Newark has potential that we must collectively liberate, exalt, bring forth; that our cities are frontiers of economic opportunity; that if the American Dream doesn’t work in Newark, it doesn’t work anywhere.

Audible came to Newark in 2007 with 120 employees, without taking government incentives. Today they have nearly 2,000 people in Newark, hundreds of them Newark residents.

But Don didn’t stop with moving here. He saw the reality that the zip code that you’re born in too often determines what kind of education and future you have.

The first thing Don and Audible did in Newark was create paid internships for students from Newark Public Schools , giving them a chance to earn and learn. Then, Audible provides them with college scholarships. .

Don has defined Audible’s purpose around Newark’s comeback — to, as Don says, pursue the idea that what a company can mean in ways that can transcend what it does. Audible has been an incredible partner for the City of Newark.

– hiring locally, partnering with community organizations to identify people who may not have high school diplomas or were incarcerated or unhoused.
– paying employees to remain living and contributing in Newark.
– founding Newark Venture Partners, a venture capital firm to invest in tech startups so they plant roots in Newark
– launching Newark Working Kitchens during COVID to keep local restaurants open and cooking more than a million meals for low-income residents.

Audible is a model for other companies seeking to elevate a city that is showing the right way to charge back. And Don is a model citizen.

Many people may not know Don had a 20-year career as an award-winning journalist and author before Audible.

He studied at NYU under the great novelist Ralph Ellison, who became a mentor. Ellison’s understanding of the power of the oral tradition inspired Don’s writing career and the founding of Audible.

Don started as Rolling Stone magazine’s London correspondent at the age of 23. One of his Rolling Stone articles based on his eyewitness account of the Red Terror in Ethiopia won an Overseas Press Club Award. Don also wrote for Esquire, The New Republic, Outside and more.

The journalist Jon Alter said Don’s book Home Fires “belongs on a shelf with classics” and, like many of Don’s writer colleagues, lamented his decision to leave writing to become an entrepreneur (“a loss for readers of narrative nonfiction”).

It’s a decision that many of us look back on with gratitude — from the people in this room, to Newark residents, to authors, , to Audible’s customers around the world.