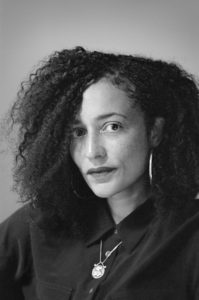 Zadie Smith was born in North-West London in 1975 and holds a degree in English Literature from the University of Cambridge. She is a fellow of the Royal Society of Literature and has twice been listed as one of Granta’s 20 Best Young British Novelists. Her first novel, White Teeth, was the winner of The Whitbread First Novel Award, The Guardian First Book Award, The James Tait Black Memorial Prize for Fiction, and The Commonwealth Writers’ First Book Award. Her second novel, The Autograph Man, won The Jewish Quarterly Wingate Literary Prize. Zadie Smith’s third novel, On Beauty, won the Orange Prize for Fiction, The Commonwealth Writers’ Best Book Award (Eurasia Section) and was shortlisted for the Man Booker Prize. Her fourth novel, NW, was shortlisted for the Royal Society of Literature Ondaatje Prize and the Women’s Prize for Fiction. Her most recent novel, Swing Time, was shortlisted for the National Book Critics Circle Award for Fiction and longlisted for the Man Booker 2017. She published her first essay collection, Changing My Mind, in 2009 and her second essay collection, Feel Free, in 2018. Her first short story collection, Grand Union, was published in 2019. In 2020 she published a short essay collection, Intimations. In 2021, Zadie Smith and Nick Laird published their first children’s picture book, Weirdo, illustrated by Magenta Fox. Zadie Smith writes regularly for The New Yorker and The New York Review of Books and is a tenured professor of Creative Writing at New York University (NYU). She lives in London and New York.

Conferral of the Award by ruth negga

RUTH NEGGA: Tonight I have the pleasure of introducing a writer of whom I have long been a fan, an author whose extraordinary talent brings us inside questions of race, religion and cultural identity, the most complex framings of contemporary society … And indeed that is exactly why she is being recognized tonight … It is a privilege to present Zadie Smith with the PEN/Audible Literary Service Award, which is intended to honor an important writer whose work has drawn a wide audience and who helps us understand the human condition in original and powerful ways.

Zadie’s novels are so alive with memorable characters, savvy humor, and trenchant dialogue. They meticulously chart her cast’s surroundings and entangled existences, with rich detail and deep insight into their circumstances.

Her novels White Teeth, Autograph Man, On Beauty, and NW, along with Swing Time make her one of contemporary fiction’s groundbreaking voices. But she also shares with us her insightful essays and criticism and, on the faculty of New York University’s writing program, her wondrous capacity for creativity.

Marrying stylistic experimentation with vivid social exploration and affecting character study, Smith’s willingness to challenge herself and her readers makes her work utterly vital, necessary—and fundamentally aligned with PEN America’s mission to reach across the realm of what’s expected and accepted, towards complex truths.

We are honored to convey to Zadie Smith the PEN/Audible Literary Service Award underwritten by Audible, Inc.