Founded in 2016, the PEN/Jean Stein Book Award is an annual award which recognizes a book-length work of any genre for its originality, merit, and impact that has broken new ground by reshaping the boundaries of its form and signaling strong potential for lasting influence. A distinguished panel of judges will nominate candidates internally and without submissions from the public. The author of the winning book receives a prize of $75,000 and is honored at the annual PEN America Literary Awards Ceremony in New York City.

From the judges’ citation: “Layli Long Soldier’s ambitious Whereas is a grand reckoning with both language and history. As citizen, as mother, as poet, she asks with profound tenderness What man [or woman] is expendable? then leads the journey towards a consciousness of song as tough-minded inquiry and reclaimed territory. An elegant and fierce introspection defines this volume of poetry, as does a rectifying spirit of restless invention. The deep wound in the American psyche is genocide; and here, Long Soldier skillfully disrupts easy abridgments that render that inheritance a simple matter of an official Apology. Whereas is also about motherhood, being an artist, and the political valence of writing and loving. Its intriguing architecture propels us into the naturalness of interrogating the structures of language and power and creating a covenant with the self. We admire her artfulness as much as her depth, grace, sense of purpose, and essential imagination.”

LAYLI LONG SOLDIER holds a BFA from the Institute of American Indian Arts and an MFA from Bard College. She has served as a contributing editor of Drunken Boat. Her poems have appeared in The American Poet, The American Reader, The Kenyon Review Online, and other publications. She is the recipient of the 2015 NACF National Artist Fellowship, a 2015 Lannan Literary Fellowship, and a 2016 Whiting Award. She lives in Santa Fe, New Mexico.

“WHEREAS is an excavation, reorganization and documentation of a structure of language that has talked the United States through its many acts of violence. . . . She has built a poetics that refuses . . . boundaries. . . . Long Soldier’s poems are radical in structure and constraint. . . . WHEREAS challenges the making and maintenance of an empire by transforming the page to withstand the tension of an occupied body, country and, specifically an occupied language. . . . Long Soldier reminds readers of their physical and linguistic bodies as they are returned to language through their mouths and eyes and tongues across the fields of her poems.”—The New York Times Book Review

“Writers who live between two languages face an extra challenge in their role as lexicographers of metaphor. . . . Layli Long Soldier manages this double-ness with the precision of a master glassblower. . . . You do not slip into this book on silken bolts of easy beauty, but scratch yourself raw on language disassembled into glittering shards.”—Los Angeles Times

WHEREAS my eyes land on the statement, “Whereas the arrival of Europeans in North America opened a new chapter in the history of Native Peoples.” In others, I hate the act

of laughing when hurt injured or in cases of danger. That bitter hiding. My daughter picks up
new habits from friends. She’d been running, tripped, slid on knees and palms onto asphalt.

They carried her into the kitchen, She just fell, she’s bleeding! I winced. Deep red streams
down her arms and legs, trails on white tile. I looked at her face. A smile

quivered her. A laugh, a nervous. Doing as her friends do, she braved new behavior—
I can’t name it but I could spot it. Stop, my girl. If you’re hurting, cry. You must

show your feelings so that others know, so that we can help. Like that. She let it out,
a flood from living room to bathroom. Then a soft water pour I washed

carefully light touch clean cotton to bandage. I faced her I reminded, In our home
in our family we are ourselves, real feelings. You can do this with others, be true. I sent her

off to the couch with a movie encouraging, Take it easy. Yet I’m serious when I say I laugh
reading the phrase, “opened a new chapter.” I can’t help my body. I shake. The sad

realization that it took this phrase to show. My daughter’s quiver isn’t new—
but a deep practice very old she’s watching me;

Read more from WHEREAS…

We Were Eight Years in Power: An American Tragedy, Ta-Nehisi Coates (One World) IndieBound | Amazon 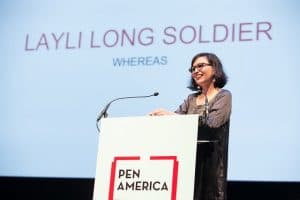 Please note that the judging panel will nominate candidates internally and without submissions from the public.