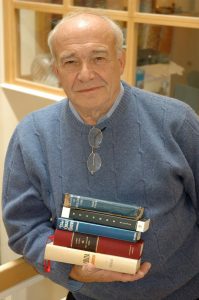 The PEN/ESPN Lifetime Achievement Award for Literary Sports Writing is given to one living American or U.S.-based writer each year to celebrate their body of work. The award seeks to recognize a lifetime of writing about sports and its dimensions of character and action with keen knowledge and insight, and especially with a literary voice evidenced in a style of agility and flair. The winner receives a $5,000 prize and is honored at the PEN America Literary Awards Ceremony.

Throughout his career, William Nack has chronicled statuesque, monumental creatures with a combination of poetry and hard observation, his voice hovering somewhere between that of Yeats and a stablehand. The result is a treasury of books and pieces (for Newsday, Sports Illustrated, GQ and ESPN) that are felt sensory experiences. Travel with him through the fine dust of a barn and watch Secretariat rise and paw the air while his walker cowers “as if beneath a thunderclap,” Sit with him in the ringside heat of a prizefight and watch stubble-chinned Jack Dempsey chase down Gene Tunney “looking as though he’d picked up an old familiar scent from his days as a saloon fighter” when he mowed down “lumberjacks with noses like doorknobs.” The 2017 PEN/ESPN Lifetime Achievement Award for Literary Sportswriting goes to William Nack because, as he has written, “The gift of reverie is a blessing divine, and it is conferred most abundantly on those who lie in hammocks or drive alone in cars. Or lean on hillside fences in Kentucky.” To read Nack is such a reverie.

Pete Hamill is a novelist, essayist and journalist whose career has endured for more than forty years. He has been a columnist for the New York Post, the New York Daily News, New York Newsday, the Village Voice, New York magazine, and Esquire. He has served as editor-in-chief of both the Post and the Daily News. As a journalist, he has covered wars in Vietnam, Nicaragua, Lebanon and Northern Ireland, and has lived for extended periods in Mexico City, Dublin, Barcelona, San Juan and Rome. From his base in New York, he has also covered murders, fires, World Series, championship fights, and the great domestic disturbances of the 1960s, and has written extensively on art, jazz, immigration and politics. He witnessed the events of 9/11/2001 and its aftermath and wrote about them for the Daily News.

Sally Jenkins is a columnist and feature writer for the Washington Post, and the author of twelve books, including The Real All Americans, a cultural history of the Carlisle Indian School’s role in fashioning modern football. Jenkins is a four-time winner of the Associated Press sports columnist of the year award, and an inductee into the National Sportscasters and Sportswriters Hall of Fame. But most proudly of all, she is the daughter of PEN/ESPN Lifetime Achievement Award winner Dan Jenkins.

Michael Sokolove has been a contributing writer for The New York Times Magazine since 2001, where his niche has been the intersection of sports, culture and science. His work has been included in the Best American Sportswriting and Best American Medical Writing anthologies. He has also written for the Times Magazine about politics and a broad range of other topics. He is the author of six books, including Drama High: The Incredible True Story of a Brilliant Teacher, a Struggling Town, and the Magic of Theater (Riverhead, 2013).