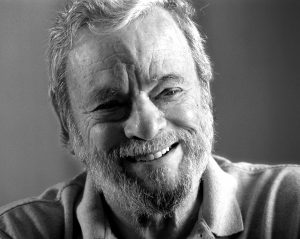 At the 2017 PEN America Literary Gala, Stephen Sondheim will receive the 2017 PEN/Allen Foundation Literary Service Award. The award is presented annually to a critically acclaimed author whose work embodies PEN America’s mission to oppose repression in any form and to champion the best of humanity. Actress Meryl Streep, who starred in the 2014 film adaptation of Sondheim’s Into the Woods, will present the prize.

Stephen Sondheim has delighted audiences worldwide for more than six decades with witty lyrics, contagious melodies, and unforgettable characters that comprise some of America’s most beloved and timeless musicals such as West Side Story, Sweeney Todd, and the Pulitzer Prize-winning Sunday in the Park with George, which opens in its Broadway revival starring Jake Gyllenhaal on February 11. He is also the winner of at least 60 individual and collaborative Tony Awards, eight Grammy Awards, an Academy Award, and a Presidential Medal of Freedom. Paying forward the mentorship of Oscar Hammerstein II that catalyzed his successful career, Sondheim dedicates much of his time to nurturing young writers and composers, including Jonathan Larson (Rent), Adam Guettel (The Light in the Piazza), and Lin-Manuel Miranda (Hamilton). In 1981, he also founded Young Playwrights Inc., the only organization of its kind committed to the development of aspiring playwrights under age 18.

“Stephen Sondheim’s oeuvre is profoundly literary in its elegiac reaching for the truth of who we are, how we love, and how we strive to locate meaning in our work. He will be the first composer-lyricist to receive this award, which recognizes his nuanced insight into human character. His support for a new generation of writers makes him a literary citizen of the first order.”