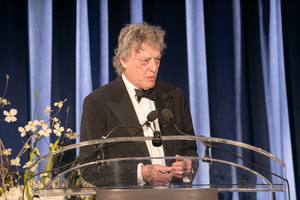 Sir Tom Stoppard delivered the following remarks after being presented with the PEN/Allen Foundation Literary Service Award at the 2015 PEN Literary Gala. Tom Stoppard was introduced by actress and longtime friend Glenn Close.

Glenn Close: Good evening. How honored I am to be up here tonight paying tribute to Sir Tom Stoppard. But I have to say, there is one person that I definitely feel is here in spirit and who I’m sure that if he were still with us would be standing in my place and speaking about Tom with the greatest of eloquence, wit, and love—the great Mike Nichols. In 1984, 10 years into my career, I had the thrill of arriving every day of rehearsals for The Real Thing to find Mike and Tom sitting behind adjoining tables at the front of the rehearsal room. Tom already holding a cigarette with his pinky up in the air, and clouds of smoke already wafting around his head—there is nothing more sexy than Tom Stoppard nursing a cigarette. Oh what bliss that was, what a privilege to witness and benefit from their extraordinary wit and friendship and their seamless collaboration. And then after we opened, I had the thrill of not only being in Tom’s astonishing play, but of having the luxury of listening eight times a week for six months to a particular set of words put in a particular order that still thrills and moves me even more today, thirty-one years later. I won’t quote the whole speech, just the end, because I feel it brilliantly describes the essence of Tom’s writing:

“Maybe Brodie got a raw deal maybe he didn’t, I don’t know, it doesn’t count. He’s a lout with language. I can’t help somebody who thinks or thinks he thinks that editing a newspaper is censorship, or that throwing bricks is a demonstration while building tower blocks is social violence, or that unpalatable statement is provocation while disrupting the speaker is exercise of free speech. Words don’t deserve that kind of malarkey. They’re innocent, neutral, precise, standing for this, describing that, meaning the other, so if you look after them you can build bridges across incomprehension and chaos. But when they get their corners knocked off, they’re no good anymore, and Brodie knocks their corners off. I don’t think writers are sacred, but words are. They deserve respect. If you get the right ones in the right order, you can nudge the world a little or make a poem which children will speak for you when you’re dead.”

Twelve years after that incredible experience, I found myself at Shepperton Studios in the UK having a terrible time getting witty enough lines for the end of 101 Dalmatians. I called Tom out of the blue, which was outrageously presumptuous, but Tom being Tom, he came up with a particularly brilliant line that actually ended up in the movie: “You may have won the battle, but I’m about to win the wardrobe.” It actually was mentioned in a review. Then, six years after that, I was in a production of A Streetcar Named Desire on one stage at London’s Royal National Theatre while The Coast of Utopia was playing on another stage. On the nights that Shipwreck Part II was playing, I happened to be in my dressing room at the precise moment that another magnificent Stoppardian monologue was being performed. I would dial the intercom into that theatre and listen every time.

I quote: “Little Kolya, his life cut so short! No, not at all! Kolya’s life was what it was. Because children grow up, we think a child’s purpose is to grow up. But a child’s purpose is to be a child. Nature doesn’t disdain what lives only for a day. It pours the whole of itself into each moment. We don’t value the lily less for not being made of flint and built to last. Life’s bounty is in its flow, later is too late. Where is the song when it’s been sung? The dance when it’s been danced? It’s only we humans who want to own the future, too. We persuade ourselves that the universe is modestly employed in unfolding our destination. We note the haphazard chaos of history by the day, by the hour, but we think there is something wrong with this picture. Where is the unity, the meaning, of nature’s highest creation? Surely those millions of little streams of accident and willfulness have their correction in the vast underground river which, without a doubt, is carrying us to the place where we’re expected! But there is no such place…that’s why it’s called utopia. The death of a child has no more meaning than the death of armies, of nations. Was the child happy while he lived? That is a proper question. The only question…If we can’t arrange our own happiness, it’s a conceit beyond vulgarity to arrange the happiness of those that come after us.” End of quote.

The work of Tom Stoppard doesn’t presume to find the unity, the meaning, the key to all the mythologies of our lives. Tom doesn’t seek to rearrange the world, instead he rearranges us. I believe that great writers, the greatest writers, leave us rearranged for the better, forever. They make us happy while we live. Ladies and gentlemen, I am deeply honored to present to one of the greatest literary artists of all time, one of the greatest rearrangers of all time, the PEN/Allen Foundation Literary Service Award to Sir Tom Stoppard.

Tom Stoppard: Well before I begin to reply, I’m going to honor a debt I owe, concerning the wonderful way that Glenn read from my play The Coast of Utopia. I’m quite proud to say I did write some of that, but I have to tell you that the play was about a genius, Alexander Herzog, and the speech leaned heavily on his various writings. And I should just shut up about this because I know that I couldn’t have had a better introduction—because I know, who could not be, you were so impressed by me, and the fact is that Alexander Herzog lost his little boy when the boy was seven and he said this thing that I would love to have written, which I would be so proud to have written. When Bakunin tried to console with him, that’s what he said. He said because children grow up, we think their purpose is to grow up. But the child’s purpose is to be a child. That doesn’t seem now as I’ve said it out loud to be an enormous digression. I’m not going to, as it were, to try to cobble together a kind of bridge between what Herzog wrote and what I wrote, the combination of the two, and the reason for my presence here.

But I will say, that I’m very proud of this award. But more than that, I’m really proud to be a writer, because writers are being honored all the time and have been as long as there have been any writers, from the moment that Plato eliminated them from his blueprint for the ideal republic. That was one of the first times that writers were being honored. And note that Plato wasn’t scared about a particular writer showing up and writing, who knows what inconvenient truth, he was actually thinking of the idea of the writer. And this is why I’m proud to be one, because the idea of society is not intelligible to me without the idea of the artist, the poet—there were no essayists and novelists, quite those terms in Plato’s world—but every kind of writing and indeed every kind of creative composition is inescapably part of our society because it is inescapably one of the things, or is it perhaps the only thing, that makes us Homo Sapiens. Everything else you can see here in the Museum of Natural History, but the Museum of Natural History doesn’t particularly preserve an example, whether in fiberglass or in painting, it doesn’t really preserve and isn’t existing to show the passerby and the public examples of the creative spirit, the creative act, the thing which transcends the physicality, the physiology of who we are.

If the idea of the writer doesn’t survive, then there won’t be any writers. And PEN is a cherishable institution, because it connects with individuals in trouble. It exists to protect writing and writers from persecution. It does not exist, it’s purpose is not to protect some persecuted writers and not other persecuted writers, but the fact is that the moment of contact between PEN as theory and PEN as action requires the individual writer, he or she, it requires a named person who writes. That is certainly where PEN as it were lights up, that’s where the wheels go round and the electricity starts making the sparks. It draws attention to persecution, that is the purpose. But we know at once that it’s not actually to do with the moral worth of an individual, it is to do with the idea of writing, the conception of the artist. We live, we artists, we live in times, which are fortunate for us. Art is valued. I always feel that it’s overvalued, by which I mean I don’t think that it’s too big for its boots but I kind of look around and I’m thinking, yeah this is great, there’s the PEN Writers in Prison Committee, yeah that’s great, I wonder why there isn’t a Pastry Cooks in Prison Committee.

The question isn’t whether we deserve it; the question is how are we going to live up to it? And I think we have to live up to it—I know it sounds so banal—but how else do you put it, you have to be true to yourself. I’m a pluralist in the sense that Isaiah Berlin was a pluralist—he believed that incompatible truths have to survive together. If they end up trying to be a Punch and Judy Show—oh my lord, I don’t suppose anybody knows what a Punch and Judy Show is, that’s such a British thing—if they start beating each other up then neither of them will persist. So all I want to say is a) thank you very much indeed, I’m honestly touched, and I want to mention that I met Tapert—by the way, where is my copy of the first edition of Rosencrantz, I don’t actually have one—but Annette, if it wasn’t for the lights, I could find your beautiful red dress, oh, there you are. Oh my lord, it’s a second edition. I wasn’t expecting a book, oh, an actual present! It says here the first folio of Shakespeare, but underneath, it says Cadbury’s, is that alright? Thank you, I’m speechless, and that’s not a good position to be when you’re speechless. So I’m going to say goodbye with the following: if we can’t live up to what is expected of us, we’ll be gone, we just won’t be there anymore and if you want to find us, you’ll have to come here to the Museum of Natural History. Thank you.