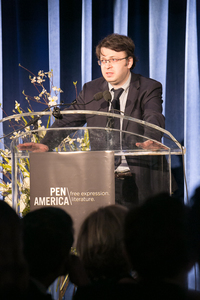 Imprisoned journalist Khadija Ismayilova was awarded the 2015 PEN/Barbara Goldsmith Freedom to Write Award at the 2015 PEN Literary Gala. Her friend and fellow Azerbaijani dissident writer Emin Milli accepted the award on her behalf and delivered the following remarks on Ismayilova’s extraordinary courage.

Thank you very much for this recognition of an extraordinary person, my friend Khadija. Actually, on the one night that I needed my voice, my voice is failing me, I’m sorry. Khadija’s story is an extraordinary story. Khadija had the courage to challenge the president of the country. She had no intention to, by the way. She repeatedly told me that she had no intention to expose the president. But every investigation she did about various areas of business, behind every business, the president’s family was popping up. So she was challenging one of the richest people in this world—morally poor, but still rich in terms of money. And in order to truly understand Khadija and her personality, I have to also say that Khadija comes from a certain tradition. Azerbaijan is a small country, and in this video you could see where it is situated. The interesting story of Azerbaijan is that it was actually first a Muslim parliamentary democracy. In 1918, there was a group of crazy people who in the middle of crazy fundamentalist religious chaos in the world, declared that Azerbaijan would be a secular and parliamentary republic. In 1905 Azerbaijan had its own Charlie Hebdo; it was the magazine Molla Nasreddin. The publishers of this magazine were hiding from fundamentalist religious people, but they were producing pieces that were very similar to what the Charlie Hebdo cartoonists were killed for. So they had courage back then in the beginning of the 20th century to do something that many many decades later New York Magazine wrote about, writing about them as a magazine that changed the world.

So Khadija is coming from this tradition of courage, and what the government and president—thanks to Wikileaks, we know this—in one meeting with an American diplomat, called Khadija an enemy of the state and his personal enemy. Khadija is showing this extraordinary courage also because she is a woman. And when the government didn’t know how to silence her, they started to film her private life. They started to blackmail her, they told her that if you don’t stop writing, we’ll show everyone who you are sleeping with and what you’re doing in your bed. And Khadija, publicly, in a Muslim country—Azerbaijan is a secular country but it’s still Muslim and it’s a very socially conservative country—had the courage to stand up behind the words, behind the investigations she was doing, and she publicly wrote on her Facebook page that nothing could silence her and that she would not stop doing what she was doing. So they released the video, they started to blackmail her. And in a country like Azerbaijan that could end up in an honor killing as well.

She was openly atheist, but despite this ugly and dirty attack against her, we have the most conservative Muslims in Azerbaijan raising their voice in support of Khadija. And that is something that is really touching. I want to focus on what you can actually do to support Khadija. I think you can do a lot. We have Salman Rushdie here, we have a lot of famous scriptwriters here. I think Khadija’s story is a story that deserves to be told in a way that can reach tens of millions and hundreds of millions of people around the world. And I think that the next award she can and should receive should really be the Nobel award. And I’m asking you to take your telephone, your contact list, and call people you know, and ask them to spread the word about Khadija. She really deserves this award and I think she showed with her life that she’s ready and she stands behind every word she writes. You are writers, you have a moral duty to be with her, to be next to her, and to protect her. Thank you very much.