Where the Dead Pause, and the Japanese Say Goodbye: A Journey 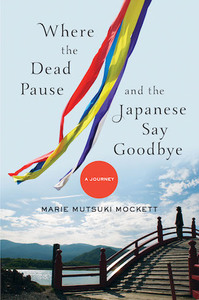 Marie Mutsuki Mockett is a finalist for the 2016 PEN Open Book Award for Where the Dead Pause, and the Japanese Say Goodbye: A Journey. Grieving over the death of her father, grandfather, and the damage inflicted on Japan by the March 2011 tsunami and earthquake, Mockett sets off on an unpredictable journey in search of solace. Guided by Zen priests and ordinary Japanese citizens, Mockett’s exploration leads her to the radiation zone, a school for Buddhist monks, a temple on Mount Doom, and much more. The following is an excerpt from the book.

Japanese stories often end with a beautiful image. The Japanese psychoanalyst Kawai Hayao has proposed that in many Japanese fairy tales, the conflict in a story is resolved by what he calls “the aesthetic solution.” In his book Dreams, Myths and Fairy Tales in Japan, which has been translated into English, Kawai writes, “In the West, the hero’s virtue is rewarded by a happy ending. But in Japan, beautiful endings are much preferred to happy endings.” Beauty is the ultimate democracy, because a beautiful thing, particularly if it exists in nature, belongs to everyone.

Kawai argues that in Japan, the highest form of beauty is imperfect. In Dreams, Myths and Fairy Tales in Japan, Kawai further elaborates: There is a famous story about a Zen master who shows what beauty is for him. A young monk is sweeping a garden. He tries to do his best at the job. He cleans the garden perfectly so that no dust is left in it. Contrary to his expectation the old master is not happy about his work.

The young monk thinks for a while and shakes a tree so that several dead leaves fall down here and there in the garden. The master smiles when he sees this. Anyone with even a passing knowledge of the terms wabi and sabi will recognize the monk and the master’s attitudes. The simplest definition of wabi sabi is that it is a kind of beauty whose highest form is expressed through imperfection. The venerable art historian Miyeko Murase instructed her students to consider that a full moon glowing brightly in the sky is undeniably beautiful.

But how much more beautiful is the moon when it is partially obscured by a bit of cloud? A geometrically symmetrical tea bowl is a lovely thing to drink from, but how cold and precise it looks beside an earthen tea bowl whose surface is slightly marred. The Japanese love the beauty of cherry blossoms in the spring. However, say the aesthetes, how much more beautiful are the cherry trees when they are just past their peak, and petals begin to dripdrop onto the ground.

Kawai writes in his book, “The Japanese fairy tales tell us that the world is beautiful and that beauty is completed only if we accept the existence of death.” Beauty heals us. But we shouldn’t make the mistake of thinking that perfected beauty is any kind of true antidote to suffering, for everything is always changing, never holding fast to its shape. Everything must one day die, and we are all always only just passing through. So it is that we might heal a bit by experiencing the passing beauty of a dance gesture, a fading ghost, or a flower.

I thought a lot about Kawai’s theory of the “aesthetic solution” when I heard the following modern-day equivalent of a ghost story. Sutō Ayane is a young woman in her twenties whose life has been completely transformed by the earthquake and tsunami of March 11, 2011. Sutō grew up in Kesennuma, the seaside town in which a large blue boat washed up onto city streets, and where the port caught fire while the water raged.

Before the tsunami, Sutō was a budding writer who worked in Sendai as a caretaker for the elderly. She lived with her fiancé, who is also from Kesennuma. Sutō’s father worked in the Kesennuma harbor as a radio technician on a fishing boat. The Sutō family home is up in the hills, far away from the shore, and after the earthquake, Sutō was able to very quickly get through to her mother, who assured her that all was fine at home, and that her father would most likely be back soon.

By evening, Sutō’s father had still not made it home, nor did he return the next day. Across Tōhoku, the earthquake had disrupted power lines and the water supply; Sutō and her fiancé stayed in their apartment for several days, in the dark, unable to bathe. Finally, a family friend offered to pick up Sutō and take her out of Sendai to the friend’s home farther inland, which did have electricity and running water. Nearby there was even a large sento, or public bath, offering discounted admission. Sutō took the offer of hospitality.

The public bath was traditional: one left one’s shoes in a locker by the entrance, then went into the women’s changing room to disrobe and to bathe. It was the first bath Sutō had had for a week. When she was done, she dressed and then went back out to the entrance of the spa to exchange her slippers for the shoes she had put in the locker. It was still winter, and Sutō had been wearing a pair of stylish black booties. As she slipped her foot into the shoe, she felt something strange: something was inside the shoe. She pulled out her foot and then inspected the boot. Inside was a round, white flower.

Sutō took the flower and held it in her hand. It was in perfect condition and had not been squashed, which ruled out the possibility that she had spent the day walking around with a flower in her shoe and hadn’t noticed. The locker door had been shut tight with a key—only Sutō had had the key. How, then, did a flower get into her shoe? It was a puzzle, and though certainly strange, it was not at all the most pressing matter on her mind. After showing the flower to her friend, Sutō eventually threw it away in a garbage bin and went on her way.

About a week later, Sutō received the call she had been dreading. Her father’s body had been found. No one knew why he had been swallowed by the tsunami; all of his coworkers had made it to dry land. Perhaps, someone postulated, he had tried to help someone stranded in their home? Whatever the reason, Sutō returned to Kesennuma for her father’s funeral.

The body was returned to the family in a casket. Sutō and her mother and sister spent a fitful night of sleep, with both Sutō’s mother and sister claiming to have received visitations from their father. Hearing this, Sutō felt a little bit left out; she alone had not been visited by her father’s ghost.

Family members arrived at the house. Soon Sutō’s father would be transported to the crematorium, the ash collected and the bones picked off of the metal gurney, and then the remains would be buried. Before all this, everyone was to see his face one more time. Sutō’s grandfather offered to go first. He lifted the upper lid of the casket, so just the face of the body was visible. Then it was Sutō’s turn.

A great effort had been made to clean her father’s body and to cover the scratches, but she could still see how he had been injured during his time in the great waves. He had been carefully wrapped in white cloth, as was the custom. And on his chest, there was a single white flower. It was the same flower that Sutō had seen in her shoe at the bath. The experience was overwhelming, and she cried.

Much later, she would realize that the incident with the flower at the bath had happened exactly a week after the earthquake. According to Buddhist tradition, it takes exactly seven days for the soul to travel from its body to its next destination. That day was also March 18, the start of the spring equinox Ohigan, when the curtain separating the mortal and spirit realms is said to thin, making it an ideal time to see the spirits of beloved ancestors.

It was impossible to miss the meaning in the strange incident of the white flower, and Sutō wrote of her experiences in a prizewinning short story that was published by a prestigious Japanese literary journal.

When I met with Sutō nearly two years after the tsunami, she was moving on with her life; she and her fiancé planned to be married and she hoped that they would return to Kesennuma to raise a family. Her fiancé, too, had lost family members: a two-and-a-halfyear-old niece and a grandmother.

Sutō had an aura of elegance and graciousness that is unusual in one so young. She was the kind of person for whom you wanted to put on your best behavior. At the same time, she emanated tremendous sadness. As someone nearly twice her age, I found myself yearning to help her. Now that I am middle-aged and a mother, I want people who are younger than I am to be happy, to be living their lives to the fullest, and to be unassailed by grief or circumstance.

We spoke about what the white flower might mean. She remained mystified by the experience, as though she could not quite believe what had happened. Even now she continues to search for an explanation for how the flower ended up in her shoe. But even if she were to learn where it came from, she said, that would not explain how it had been the exact same species as the flower on her father’s body in the casket, a type of flower she had never seen before or since.

We both spoke of how love is an invisible thing, impossible to see even if someone is still alive. I wanted very much to believe that the flower was a final act of love and hope. The love we have for people, after all, never truly goes away, even if they leave us in owakare, the great parting.