What Captain Underpants Can Tell Us About Net Neutrality 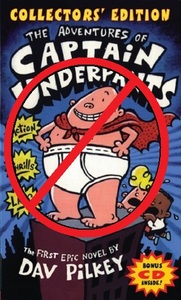 On September 10, PEN joined the Battle for the Net coalition to protest measures taken by the federal government that will end the open internet as we know it. There are two issues that would severely affect writers: the first is that providers of the Internet backbone can speed up or slow down the transmission of information based on how much you pay. Today, information moves equally over the net, but ending net neutrality would create a “slow lane” and a “fast lane,” something that even President Obama has criticized. The second danger in eliminating the open net involves content discrimination. Using tools such as deep packet inspection, internet providers can look at information moving through their networks and decide never to deliver it if they don’t like what they see. This is terrible for writers, especially dissidents and authors writing about unpopular or controversial themes.

At PEN, we’ve read this story before. They’re called banned books. Every year, PEN joins the National Coalition Against Censorship in promoting Banned Books Week to celebrate the freedom to read. Parents and citizens challenge books based on their content, and the few challenges that succeed remove titles from circulation in libraries or schools. This means that students—and adults—can’t make decisions about which books they want to read. And we have found that these challenges are not necessarily targeted at the most controversial texts, by any reasonable standard: Captain Underpants by Dav Pilkey was the number one challenged book in 2013, for”offensive language” and “violence.” When challenges occur, they are then assessed by a local school board or local association, which debate whether the book should be removed from circulation. But even after that deliberation, the challenges may rise up again. Captain Underpants, for example, was the most frequently challenged book in both 2012 and 2013.

Over 3.7 million people have voiced their concerns to the FCC, the agency with the most power to preserve the open net, and the Battle for the Net action led to more than 1,000 calls per minute to elected representatives around the U.S. Our PEN members have already shared how losing net neutrality would affect them, and it’s troubling. We’ve read this book before.

There are just seven hours left until the 2022 Writing as Activism Fellowship application closes! This is the final chance to apply for a six-month immersive workshop experience alongside fellow NYC-based writer-activists: https://bit.ly/2ZvShCR.