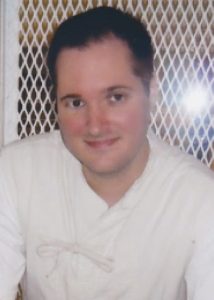 Thomas Bartlett Whitaker is serving a life sentence in Texas. Since entering prison, he earned his undergraduate degree (graduating Summa Cum Laude from Adams State University) and is receiving a Masters Degree in Humanities from California State University Dominguez Hills this fall. He has won first place three times for fiction and essay in the PEN Prison Writing Contest, and his writing has been published in the Solitary Watch anthology, Hell Is a Very Small Place. More than 150 pieces of his writing have been published on Minutes Before Six, the nonprofit website project he founded in 2007 upon his arrival in prison. He spent 11 years on Texas Death Row before being granted clemency in February 2018. Thomas currently has two books being edited for publication, No Mercy For Dogs and Who Fears Hell Runs Toward It: On the Christian Metaphysical Foundations of the American Penitentiary and the Missing Image of Resistance in Foucault’s Discipline and Punish, the latter of which has already received a self-imposed award for having the longest book title in the history of the universe.