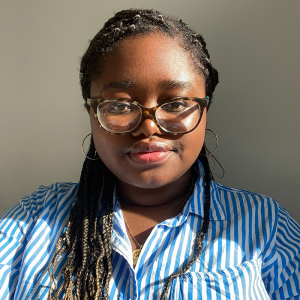 Peris Tushabe is the free expression and education program assistant at PEN America, supporting PEN America’s advocacy for free expression in educational institutions as well as the Free Speech Advocacy Institute. Tushabe was born and raised in Uganda before moving to the United States, where she attended high school and earned her bachelor’s degree from Skidmore College in political science, minoring in French language studies. At Skidmore, she also wrote her honors thesis on youth movements in Uganda and the role that social media plays in pushing back against authoritarian governments.

Prior to joining PEN America, Tushabe interned at the Frances Young Tang Teaching Museum as a public programming assistant, and worked for candidate Tedra Cobb in her campaign for the U.S. House of Representatives. Tushabe is a proud member of Phi Sigma Alpha and Phi Beta Kappa, and continues to be interested in the ways young people can harness power to push for their rights and more democratic and free futures.