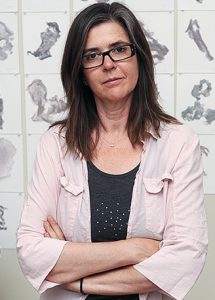 Nigel Poor is a visual artist whose work explores the various ways people make a mark and leave behind evidence of their existence. Her work has been exhibited nationally and internationally, and can be found in various museum collections including the SFMOMA, the M.H. deYoung Museum,  and the Corcoran Gallery of Art, Washington D.C. She is also a professor of photography at California State University, Sacramento. In 2011, Ms. Poor got involved with San Quentin State Prison as a volunteer teacher for the Prison University Project. She started working in 2013 with a group of incarcerated men producing a radio project called The San Quentin Prison Report which airs on KALW 91.7 FM. She is the co-host and co-creator of the Ear Hustle podcast with Earlonne Woods, who also serves on the PEN America Writing For Justice Advisory Committee.