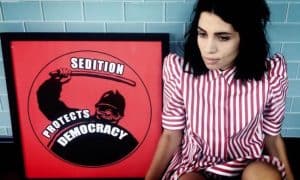 Nadya Tolokonnikova is a conceptual artist and political activist from Russia and the founder of the art collective, Pussy Riot. In 2012 she was sentenced to two years’ imprisonment following an anti-Putin performance in Moscow’s Cathedral of Christ the Saviour.

Shortly after her release in 2013, Nadya created MediaZona, an independent Russian news service focused on Russian courts, law enforcement, and prison system, and Zona Prava, a prisoners’ rights non-governmental organization. Besides creating audio visual art such as “Make America Great Again” and “Police State,” she has spoken before the U.S. Congress, the British Parliament, and the European Parliament; has lectured as an honorary speaker at Harvard, Cambridge, the Glastonbury music festival, to name a few; is a Lennon Ono Grant for Peace recipient; and is a co-recipient of The Hannah Arendt Prize for Political Thought.