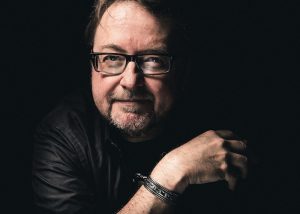 Luis Alberto Urrea is a critically acclaimed and best-selling Mexican American author of 18 books of fiction, nonfiction, and poetry. A Guggenheim Fellow, Pulitzer Prize finalist for nonfiction, and member of the Latino Literature Hall of Fame, Urrea was born in Tijuana to a Mexican father and American mother. Most recognized as a border writer, Urrea says, “I am more interested in bridges, not borders.” His most recent book is The House of Broken Angels, a New York Times Notable Book of the year, finalist for the National Book Critics Circle Award and recently acquired by the Hulu network for a series. Urrea won an American Academy of Arts and Letters Fiction award for his collection of short stories, The Water Museum, which was also a finalist for the 2016 PEN-Faulkner Award, and named a best book of the year by The Washington Post and Kirkus Reviews, among others. Urrea lives with his family in Naperville, IL, where he is a distinguished professor of creative writing at the University of Illinois-Chicago. He joined PEN America’s board in 2021.