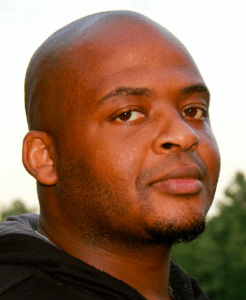 Kiese Laymon is a black southern writer, born and raised in Jackson, Mississippi. Laymon attended Millsaps College and Jackson State University before graduating from Oberlin College. He earned an MFA in Fiction from Indiana University. Laymon is currently the Ottilie Schillig Professor of English and Creative Writing at the University of Mississippi. He served as the Distinguished Visiting Professor of Nonfiction at the University of Iowa in Fall 2017.  Laymon is the author of the novel, Long Division  and a collection of essays,  How to Slowly Kill Yourself and Others in America, and Heavy: An American Memoir. Heavy, winner of the Andrew Carnegie Medal, the LA Times Isherwood Prize for Autobiographical Prose and Audible’s Audiobook of the Year, was named one of the Best Books of 2018 by the The Undefeated, New York Times, Publishers Weekly, NPR, Broadly, Library Journal , The Washington Post , Southern Living , Entertainment Weekly, San Francisco Chronicle and The New York Times Critics. Laymon has written essays, stories and reviews for numerous publications including Esquire, McSweeneys, New York Times, Virginia Quarterly Review, ESPN the Magazine, Granta, Colorlines, NPR, LitHub, The Los Angeles Times, The Guardian, PEN Journal, Fader, Oxford American, Vanity Fair, The Best American Series, Ebony, Travel and Leisure, Paris Review, Guernica and more.

The 2020 #PENLitAwards ceremony will be hosted by @SethMeyers on 3/2 at @TownHallNYC! Check out Seth’s conversations with many authors (including PEN Members) on @LateNightSeth at https://bit.ly/2vykVDQ and join us for #PENLitAwards. Tix on sale here: https://bit.ly/376Ba8l

An Egyptian court overturned Thursday a decision to release prominent activist, Alaa Abdel Fattah, who has been detained for nearly five months without trial over what his family says are unjust charges.
https://bit.ly/2vRh2Kk