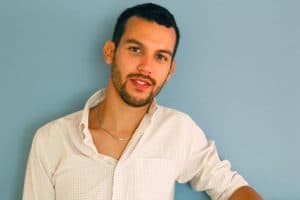 Justin Torres’s first novel We the Animals, a national best-seller, has been translated into 15 languages and is currently being adapted into a feature film. He has published short fiction in The New Yorker, Harper’s, Granta, Tin House, The Washington Post, Glimmer Train, Flaunt, and other publications, as well as nonfiction pieces in publications like The Guardian and The Advocate. A graduate of the Iowa Writers’ Workshop, he was a Wallace Stegner Fellow at Stanford University, a fellow at the Radcliffe Institute for Advanced Study at Harvard, and a Cullman Center Fellow at The New York Public Library. The National Book Foundation named him one of 2012’s 5 Under 35. He has been the recipient of a grant from the National Endowment for the Arts, a Rolón Fellowship in Literature from United States Artists, and the VCU Cabell First Novelist Award. Recently, he served as Picador Guest Professor for Literature at the University of Leipzig. He lives in Los Angeles, where he is assistant professor of English at UCLA.