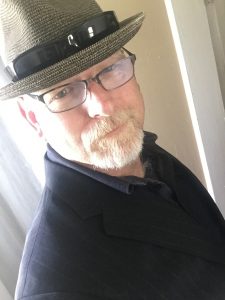 J.D. Mathes is a photographer, author, book critic, and librettist. While finishing his Bachelor of Arts in English at Lewis-Clark State College, he was awarded a Jack Kent Cooke Foundation Scholarship that funded his MFA in fiction writing at the University of Idaho. Two of his books are Shipwrecks and Other Stories, and a memoir, Ahead of the Flaming Front: A Life on Fire, about his experiences fighting wildfire throughout the American West for fourteen seasons, including four years on an elite helicopter rappel crew. A single-dad to two daughters, he now teaches English at Bakersfield College. In the mid-80s, he was incarcerated in federal prison on a firearms charge, which destroyed his military career. The experience shattered him for years, and even as he still struggles with the darkness, he gets his flawed self out of bed every day to do the best he can. He is a 2019-2020 PEN America Writing For Justice Fellow.