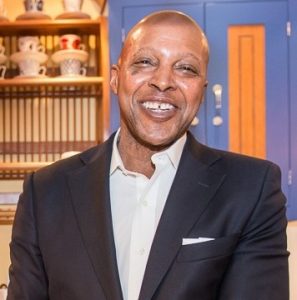 Erroll McDonald is a Vice President and Executive Editor at Alfred A. Knopf.  In his decades-long career in the industry, he has published, among other writers, Toni Morrison, Kazuo Ishiguro, Salman Rushdie, Italo Calvino, Wole Soyinka, Sandra Cisneros, Ngugi wa Thiongo, John Edgar Wideman, Harold Bloom, Fran Lebowitz, Henry Louis Gates, Jr., Lucy Sante, Margo Jefferson, Richard Posner, Nina Simone and Richard Pryor.  A former PEN America trustee, he is Chair of the Board of Directors of The Center for Fiction and a board member of The Brooklyn Rail.  He is a professor at Columbia and a member of the Council on Foreign Relations. Of Caribbean heritage, Erroll was born in Limon, Costa Rica, and raised in Brooklyn, New York.  A graduate of the Bronx High School of Science, he earned a Bachelor of Arts degree in English (summa cum laude, Phi Beta Kappa) from Yale College.  He studied Comparative Literature in the Yale Graduate School of Arts and Sciences, and holds an MBA from Columbia University Graduate School of Business.

"Amid efforts to restrict books that include race-related themes, several new book clubs have launched around the country to keep literature by Black authors in the spotlight." #BlackHistoryMonth https://www.moultrieobserver.com/news/local_news/black-history-month-black-authors-keep-history-alive-amid-efforts-to-suppress-blackness/article_ff445067-f6a1-5ad9-892b-360850922553.html via @themobserver