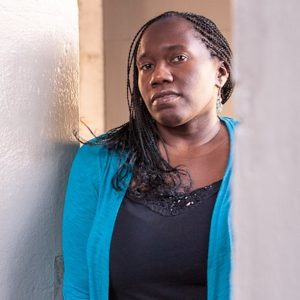 Cynthia Manick is the author of Blue Hallelujahs (Black Lawrence Press, 2016). A Pushcart Prize nominated poet with an MFA in Creative Writing from the New School, she has received fellowships from Cave Canem, Hedgebrook, the MacDowell Colony, Poets House, and the Saltonstall Foundation of the Arts among others. A winner of the 2016 Lascaux Prize in Collected Poetry and a 2017 recipient of the Barbara Memorial Fund Award for Poetry, Manick serves as East Coast Editor of the independent press Jamii Publishing and is Founder and Curator of the reading series Soul Sister Revue.  Her poem “Things I Carry Into the World” was made into a film by Motionpoems, an organization dedicated to video poetry, and has debuted on Tidal for National Poetry Month and WNET Reel 13 Shorts. Manick’s work has appeared in the Academy of American Poets Poem-A-Day Series, Bone Bouquet, Callaloo, Kweli Journal, Los Angeles Review of Books (LARB), Muzzle Magazine, The Wall Street Journal, and elsewhere. She currently resides in Brooklyn, New York.