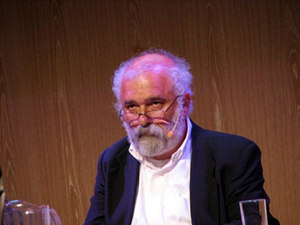 Earlier this week, PEN reported that publisher, writer, rights advocate, and leading Turkish PEN Member Ragip Zarakolu was arrested in a roundup of writers and scholars in Turkey last Friday. On Tuesday, he was formally charged under Turkey’s sweeping anti-terrorism laws. On Thursday, Ragip sent the following open letter from behind prison walls:

My arrest and the accusations of being a member of an illegal organisation are part of a campaign to intimidate all intellectuals and democrats living in Turkey and, more specifically, to isolate Kurds.

The police forces that searched my home found nothing more than what you would normally find in a writer’s home and confiscated these items as ‘evidence.’

Among these items were Habiba by Ender Öndeş, a book that is published and freely sold in Turkey, the second volume of Doğan Özgüden’s Vatansız Gazeteciler (Stateless Journalists), Barış Süreci (Peace Process) by Yüksel Genç, notes prepared for the publication of “Alman Belgelerinde Ermeni Soykırımı” (“The Armenian Genocide according to German Sources”), a short piece I had prepared for the back cover of former CHP (Republican People’s Party) MP Sırrı Özbek’s latest book and a draft of a work called Ermeni Sözlü Tarih Çalışması (Armenian Oral History Project).

The government must give an explanation for why I was arrested only a week before I was due to travel to a conference in Berlin and, from there, to conferences at Colgate University (USA) and in Los Angeles and Michigan.

Under custody, I was deprived of all of my bank and credit cards, which are being kept by the authorities.

It is yet unclear when I will be able to exercise my right to trial, and it is evident that this state of affairs may last for months.

I have not been asked a single question regarding the organization I am accused of being a member of; rather, I have only been pressed on works that I have written or edited, speeches I have given, and free and public meetings I have attended.

I believe that it is time to show a collective opposition to this wave of arrests, which has become a campaign of mass lynching, and that all moves by the authorities that go against the law and principles of due legal process must now cease.

With my greetings and my regards,

Want to do more? Pass this post along, follow us on Facebook and Twitter, and most importantly, join PEN and our member-based Freedom to Write Committee to work more closely on these and other cases.