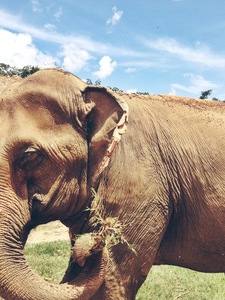 Elizabeth Harris is the recipient of a 2013 PEN/Heim Translation Fund grant for her translation of Antonio Tabucchi’s Tristano Dies. Read her essay on translating Tabucchi’s work here.

… Rosamunda Rosamunda on such a lovely evening I truly am believing it’s fairy dust I’m breathing a thousand voices thousand choices thousand hearts are all rejoicing such happiness is ours such joy beneath the stars Rosamunda if you look at me Rosamunda I’ll your sweetheart be…you like that one?…that’s from my time, when Rosamunda looked at Tristano and the more she looked at him the more he liked her…Rosamunda if you look at me Rosamunda I’ll your sweetheart be…Oh Rosamunda all of my love is for you oh Rosa-munda the more I look at you the more I like you Rosa-mu-u-u-unda’…hearts are all rejoicing such happiness is ours—not that it was so happy back then, it was cold in the mountains, frozen, really, outside, inside, I’ll tell you about it, get comfortable, you’ve got a bit ahead of you, but not too long, don’t worry, rough guess, maybe a month or so, you’ll see, I’ll be gone before the end of August, how was the drive?…it’s not easy finding your way around here with all the twists and turns, I told Frau to be really careful giving directions, I expected you earlier, but I’m sure she did her best to confuse you, not that her Italian isn’t good—it’s better than mine—been here her whole life—but when she doesn’t want to do something she starts turning German, just for spite. You’ll take Daphne’s apartment, tell her I said so.

…You know, all told, life’s more what you don’t remember than what you do…Frau popped her head in, not one ripple now, she told me, to show you swam with a woman, and she shut the door again. I don’t know if that was Sunday’s poem or some decree…Frau gets moralistic when there’s work to be done. But what work?—what’s there left to do in this house, and today’s not exactly Sunday, right?…you’ve got to have the memory of an elephant, but that’s not what we men have, who knows, one day maybe they’ll come up with an electronic memory, a card the size of your fingernail that they’ll slip into your brain to record your entire life…Speaking of elephants, of all the creatures of this world and all their funeral rites, I’ve always admired the elephants’ the most, they have this strange way of dying—you know about it? When an elephant feels his time has come he leaves the herd, but not alone, he chooses a companion, and they leave together. They start out across the savannah, often at a trot, depending on how urgent the dying elephant is feeling…and they wander and wander, sometimes kilometers and kilometers, until the dying elephant chooses his place to die, and he goes round and round again, tracing a circle, because he knows it’s time to die, he’s being drawn into death but needs to understand this space, as though he has an appointment, as though he wants to look outside himself, look death in the eye, and tell her, good morning madam death, here I am…of course it’s an imaginary circle, but it helps to “geography” death, if you will…and he’s the only one who can enter this circle, for death’s a private act, extremely private, so no one else can enter except the one who’s dying, and at this point he tells his companion he can leave, goodbye, thanks so much, and the other returns to the herd…I started reading Pascal when I was a young man, I used to like him, especially his Jansenist beliefs, it was all so black and white, so discernible; see, back then, in the mountains, life was black and white, your choices had to be precise, here or there, black or white, but then life teaches you the different shades of gray…But I’ve always liked Pascal’s definition, a sphere whose center is everywhere and whose circumference is nowhere, it reminds me of the elephants…And in a way, this has something to do with why I called you here…like I said, you’ll need to be patient because it’s not quite my time yet, but you knew at once to trot along beside me, to accompany the one who’s dying…I’m the only one who knows my circle, I know when the moment will arrive; it’s true, she chooses the hour, but it’s also true that you have to agree on her choosing you, it’s something she decides but in the end it’s something you decide as well, as if you’d made your choice and were only giving in…For now, let’s trot along together, and while it might seem we’re moving forward, we’re really turning back, because I’m an elephant who’s called you to turn back, but I’m turning back to reach my circle that’s ahead. So for now, just listen and write. When the time comes for us to say goodbye, I’ll let you know.