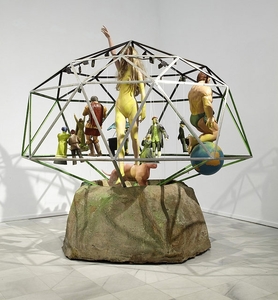 Translator’s note: The first two extracts are footnotes from Canto IV. There are 98 lines of the main text in this canto, and 134 in footnotes! The first footnote is on the general theme of ambition, and the second on pride, and the fact that animals and birds (apart from the peacock) don’t have it, despite their various accomplishments. The third extract is from the enormous list in Canto II in which Roussel presents 207 examples of things that are visually similar but of different sizes.

There is no one who does not cherish an ambitious dream;
The worker believes he will see himself dictating, at the time of a strike
(These days people use their reason, and each, with their eye on the goal
((We all have one: as long as the nape of his neck,
Laid bare for the blade of the guillotine,
Remains for a quarter of an hour longer connected to his spine,
Thinking: “Letting one’s prey slip occurs — often — even
To someone who holds it most securely” (((and indeed, the imbecile
Escapes from his padded cell, the prisoner in solitary confinement from his jail,
The cheese from the beak of the duped crow;
— On some occasions keeping silent is the best option;))),
The murderer has only one aim: escape;)),
Whatever his or her ideal is: to earn a large salary,
To give birth to children, to see the threshing floor overflowing with his grain
Or to make his pulse rate slow and settle down,
Feel that, to succeed, it is better to think and act
Than to make — jobbing worker, infertile wife,
Harvester or invalid — a wish in the moment
That a shooting star leaves its shining trail;),
Tired of giving his sweat to the bourgeoisie to drink
(It is often for Peter that Paul suffers and works;
Vespucci exploited Columbus’s discovery;
And it is to furnish a pearl for some finger or waistcoat
That an oyster spends its life labouring;), laws to his boss;
The slut in her attic dreams of living in style;
And to see his hands adorned with amethysts and holding a crozier
Is a fantasy dear to each fledgeling priest.

If human excellence drives out modesty
As much as Monday does the ardour of workers
(One gets used to leisure; the soul and the heart elsewhere,
The lycée pupil is sombre when he returns in October;),
And insanity, in the case of a criminal, the shame of his crime,
And an unsnowy winter high prices for road salt,
Yet pride is not a universal vice;
Leaving aside the peacock, it steers clear of beasts:
The swallow, despite its ability to predict tempests;
The ram, although it is the emblem of the order of the Grand Cross
(Everyone is familiar with the Golden Fleece); the cat,
Although it can work out its bearings at midnight without a candle,
Although it knows how to predict — just like the swallow,
But not so accurately or publicly —
By the static its fur gives off
The anger lurking in a sky that feigns calm,
Although it allows spinsters to enjoy a sweet old age
And can walk in silence even when not on a carpet;
The wolf, although a she-wolf had famous dugs;
The he-goat, although his skin furnishes humans with water-bottles;
Despite the high price currently demanded for his skin, the otter;
Although his name designates a fabric, the alpaca.

the candle end of a miser,
For a flat-headed drawing pin on its own
With its point in the air; — in Switzerland, at the bazaar, for an eyelash,
Curved escapee from a soft eye, the black horn
Of a chamois; — a warming pan after it’s been hung on its nail,
For a motionless pendulum, called back to life;
— In a rickshaw just as it’s being readied,
The puller’s degrading harness, for a pair of braces;
— At a lewd woman’s house, a pleasant lace-fringed pillow,
For an unused pincushion with a merry flounce;
— A mask put aside by a tired fencer,
For an eye protector to be placed over the glasses
Of a stonebreaker; — the clearly wrinkled temple
Of an old man, for the upper part of the underside of a fist;
— For the hair-touselling black cloth of a photographer,
That with which, generating a breeze, four people cover
A coffin; — an album of portraits, if, to open it,
You have to overcome one or two fasteners, for a parish register;
— For a lowly button hook, the hook, almost a part of his body,
Whose noble fate is to stand in for the five fingers of an armless man;
— An arm sling, for the scarf in which a much enlarged
Cheek is hidden on a day when it’s inflamed;
— When he’s making iron hot enough to be bent,
For a pair of hearth bellows, the bellows used in a forge;
— For that which someone with a cough shows to a throat-doctor,
An arched cavern, reddened by the setting sun,
With a solitary stalactite; — a lake of blood that appears
In a dangerous district, for the treacherous spittle
Of a consumptive; — at a saddler’s, the tether
From which an empty stirrup gleams, for the broken fastener
Of a yellow umbrella; — for the perfidious, sworn-at bit of shot
That an eater of game spits aside, cursing it to the devil,
A cannonball cleaving the air…