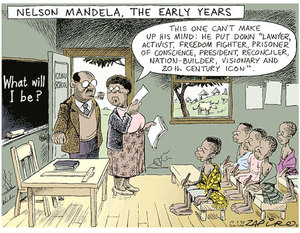 Zapiro is South Africa’s most celebrated cartoonist. His work has been featured in the BBC and The New York Times, and he has won numerous awards. But Zapiro’s cartoons have also come with a cost. He has received multiple death threats and been sued for over R20 million (roughly $3 million) for his scathing comics about South African President Jacob Zuma. Despite these travails, he has remained a passionate champion of freedom of expression and an active member of South African PEN. This is the first in a two-part series. Read PEN’s interview with Zapiro here. All photos © Zapiro. Please visit www.zapiro.com for more information.

Above, right. Although Zapiro criticized Nelson Mandela as a leader, he still recognized his staggering lifetime achievements. Mandela encouraged Zapiro to continue drawing his satirical cartoons, a sharp contrast to later leaders.

President Thabo Mbeki, who succeeded Nelson Mandela, came into power promising that he would deliver vitally needed services and opportunities for South Africans, leading Zapiro to coin him “Mr. Delivery.” When Mbeki’s promises did not materialize, he was viewed as aloof, especially because of his frequent international travel. Mbeki resigned in 2008 after African National Congress party leadership announced that it would no longer support him.

Zapiro sharply scrutinized the presidency of George W. Bush. As the caricatures developed, the former president increasingly resembled an ape.

Former health minister Manto Tshabalala-Msimang refused to promote anti-retroviral drugs to address the HIV/AIDS pandemic affecting South Africa. She earned the nickname Dr. Beetroot for instead promoting the benefits of beetroot, garlic, lemons, and African potatoes—and good general nutrition. Tshabalala-Msimang was widely seen to be following an AIDS policy in line with the ideas of former President Thabo Mbeki, who had publicly expressed doubts about whether HIV caused AIDS and questioned the toxicity of AIDS medicines at the time. The minister would eventually sue the Sunday Times newspaper (and lose) for defamation and invasion of privacy for publishing a story about her binge drinking in a hospital in 2005.

From the optimism of 1990, Nelson Mandela peers out at the harsh realities facing South Africa in 2010, two decades after President F.W. De Klerk announced his release.

President Jacob Zuma sued Zapiro for R15 million of a total R63 million in libel suits for three separate cartoons in 2006. He later sued Zapiro for an additional R7 million for a cartoon depicting Zuma about to rape Lady Justice.

Freedom of expression in South Africa is currently under attack on multiple fronts. This cartoon refers to an earlier piece in which President Jacob Zuma and his allies prepare to rape Lady Justice. (In 2006, Zuma was charged and acquitted for rape.) He would later sue Zapiro for R7 million for the Lady Justice cartoon.

President Jacob Zuma currently has four wives and has fathered more than 20 children. In this cartoon, each baby bears Zuma’s distinctive feature as imagined by Zapiro: a shower head. In 2006, Zuma claimed under oath that a shower had prevented the transmission of HIV after he had unprotected sex with an HIV-positive woman. At the time, Zuma was head of the government’s HIV/AIDS program.