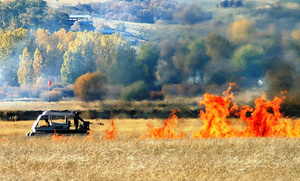 This piece was submitted by Tomas Bannerhed as part of the 2014 PEN World Voices Online Anthology.

There’s Father, I thought. In his eternal cloud.

This piece has been excerpted from The Ravens, which was originally published in Swedish as Korparna by Svante Weyler bokförlag (2011). First published in Great Britain by The Clerkenwell Press (2014).